The Houses Have a Hearse 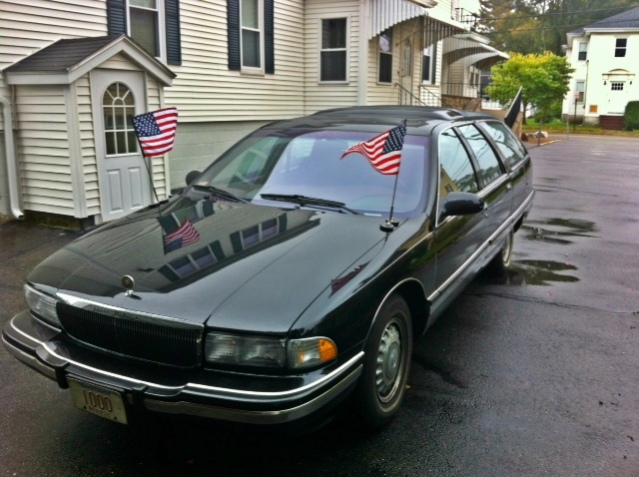 Ok, so it’s not really an actual hearse in the classic sense, but rather it is a station wagon that was a funeral car, that, yes, did have a hearse license plate. More on its history a little later.

Let’s back up a few decades to when I was a teenager learning how to drive. Most of the guys my age wanted a Pontiac Firebird, an old Plymouth Barracuda, or a Chevrolet Monte Carlo. I wanted a station wagon.

Seriously. I’ve always had a thing for wagons, including the ones that my parents carted us around in over the years, like this 1960s Ford Falcon wagon, later a 1971 Ford Torino wagon and also a 1980 Ford Fairmont Squire. Evidently, my chore was washing those wagons and that cream-colored Mercury Monarch. 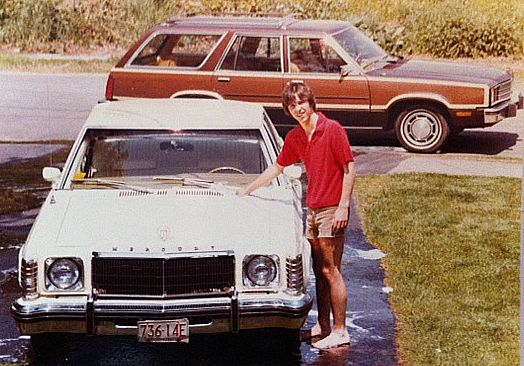 Longtime readers of “the Hartfordite” know about my penchant for these cars, that were such a part of American culture, especially the ones with faux wood paneling. It is one of the many reasons my brother calls me Clark, as in the lead character in the National Lampoon Vacation movies featuring that iconic Family Truckster. The sight of a woody wagon seems to bring out the nostalgia in people, as they wax poetic about their parents’ Mercury Colony Park, Pontiac Safari or Oldsmobile Vista Cruiser, and talk about the fond memories in the rear facing seats in the way, way back. SUVs and minivans came along and made most wagons extinct, but I just don’t see a day when someone reminisces “my parents had the coolest beige minivan.”

In 2008, I picked up a used Buick Roadmaster Estate Wagon from a nice old lady in Milford, Connecticut who wanted her husband’s prized car to go to someone who would appreciate it.  Our family most certainly did, logging more than 50,000 miles across Connecticut and Rhode Island,  taking it to the beach, pumpkin patches, the Christmas tree farm, and many a trip to Home Depot. Those adventures gave me material for this blog, but four years later after a wreck and a repair, we sold her.  I have never missed a car more.

Recently, I’ve been yearning for another one, and after seeing an acquaintance pick up a Ford Country Squire, I was a little jealous. I spent the last month searching ads for a reasonably priced woody wagon, and after checking out some high mileage wagons that needed some work, I suddenly got lucky on Craigslist. I spotted an ad for a 1996 Buick Roadmaster hearse, with only 18,000 miles! 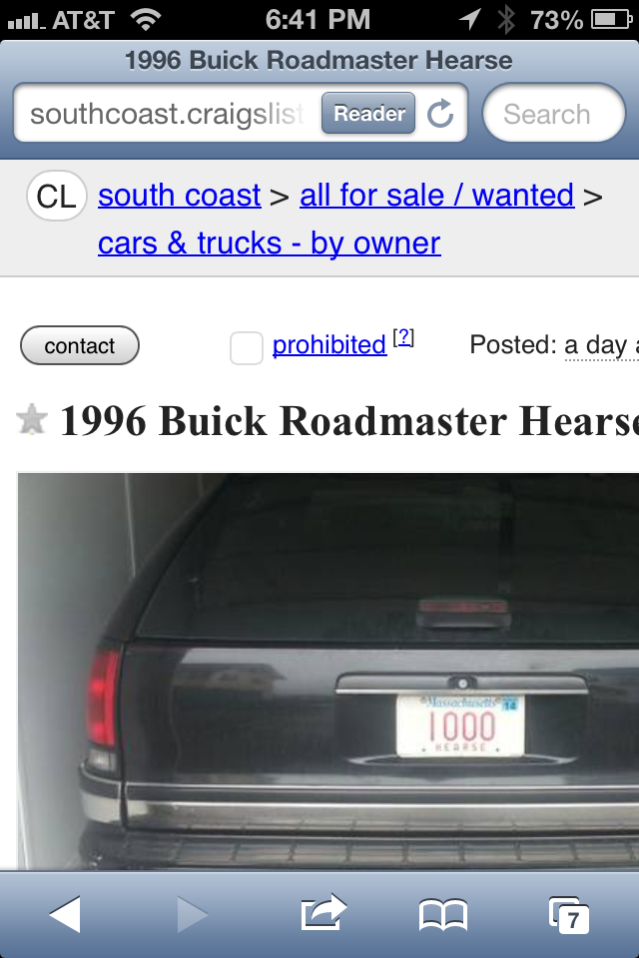 It didn’t look like a hearse in the pictures, and when I called, the man on the other end told me it was a standard station wagon, but used by his father as a hearse. He had placed the ad just a short time before I called.

I headed off to Taunton, Massachusetts, about a two hour drive from Hartford. The car was owned by the Marshall Funeral Home in Taunton, and was driven by an undertaker named William Marshall. Mr. Marshall was well known around town as a compassionate, caring funeral home director, who helped thousands of people over the years with the initial coping of the loss of a loved one.

The Roadmaster was being sold by Marshall’s widow and son, who told me he loved that Buick and always dismissed suggestions he trade it in for a newer model. Mr. Marshall took meticulous care of the Roadmaster, rarely took it onto the highway, and it spent every night in a garage. And again, it only had 18,000 miles! Like my first Roadmaster, these sellers also wanted their car sold to a driver who would love it. I didn’t ask too many questions about the car’s history in the funeral home’s business, but suffice it to say, it did carry some passengers who didn’t ask for the radio to be turned up or complain the driver was going too fast. 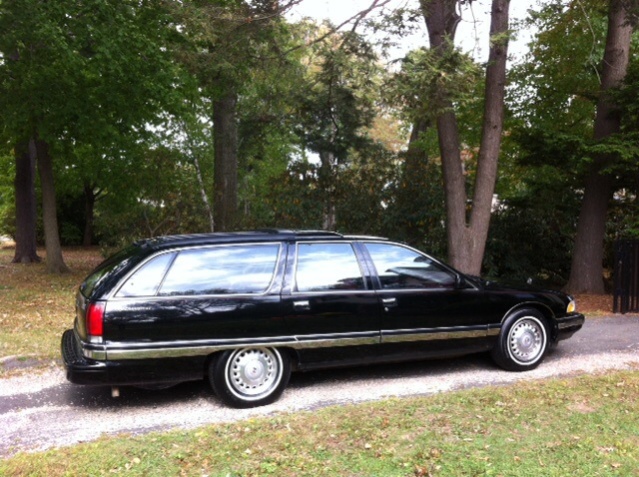 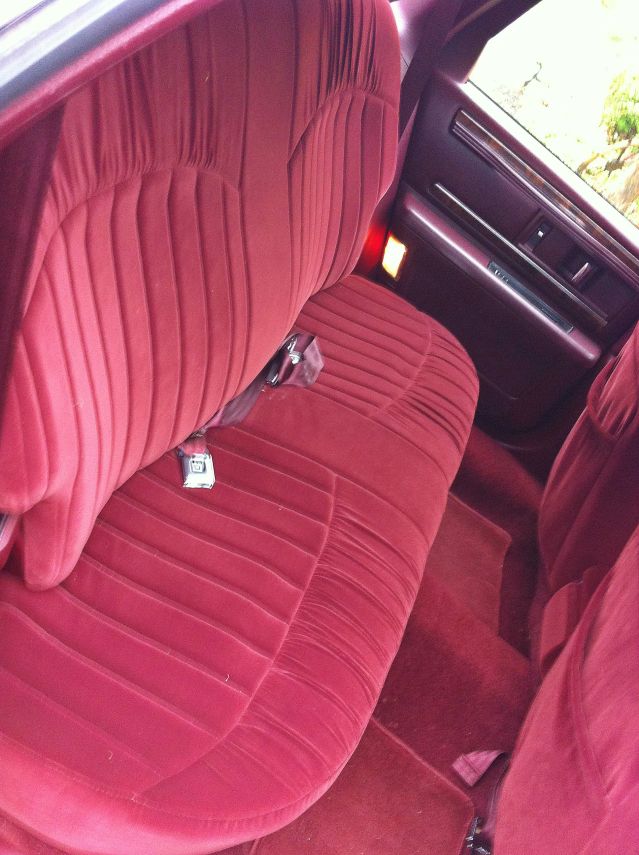 After a whiff of its still new car smell, a test drive, a feel of the immaculate cherry velour interior, and a look under the hood, I bought it. The Marshalls threw in the magnetic flags that adorned the Buick for military funerals. I later learned this particular Roadmaster is very rare. According to the Heritage Center at General Motors, Buick made only 9,473 Roadmaster wagons in 1996, and only one in fifty was made without the wood siding, meaning only 189 woodless models were made that final year of production. Let the adventures of the new Roadmaster begin.

By the way, we’ve nicknamed this Roadmaster, “Hearsula,” a fun nod to one of kids’ favorite movies. Like our new Buick, Ursula from the Little Mermaid, is a big, powerful, dark, menacing force, although Hearsula is much bigger than a squid, more like a whale.

I should add, these older wagons are considered future collectibles, yet can be had for the fraction of a new car.