My Close Call in Traffic

We had a little drama in my family this morning. While on my way to bring my son Julian to pre-school, an elderly driver suddenly turned in front me without warning and crashed into my car. We weren’t going that fast, so the impact seemed to be minor. I instinctively checked on my son, who seemed OK while watching a movie, and then hit the red Onstar emergency button when I noticed the other driver appeared injured.

A witness rushed over, as did a few other people. In a matter of minutes, Hartford Police, the fire trucks and an ambulance were on the scene. That driver was talking to EMTs and was taken away to the hospital. 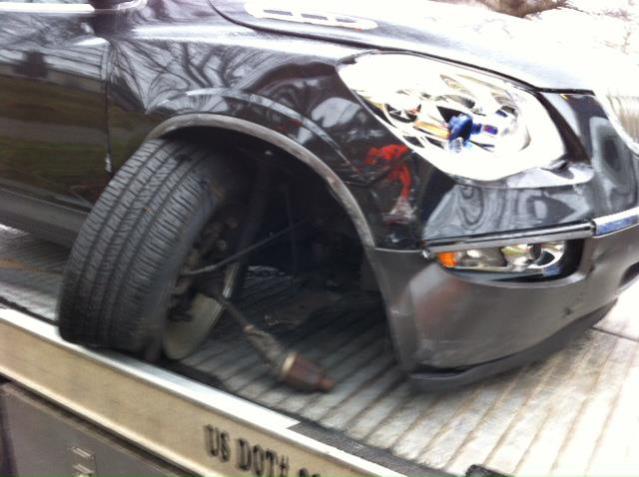 My trusty Buick Enclave didn’t look that badly damaged, but was not driveable. The tow truck driver who hauled it away told me the driver crashed into me at such an angle the Enclave has severe damage to the suspension and perhaps the axle, never good signs. We’ll see what the dealership and insurance company have to say.

In the big scheme of things, this was nothing. It could have been much worse, and when I notice all the people texting while behind the wheel, I can count myself among the lucky ones.

I want to thank a few people today: the Hartford police officers and firefighters who responded to the scene, and who were great with my son, showing him the fire truck and a helmet. He’s been talking about the “crash” all day, oblivious to the potential danger we faced on the way to school. Also, thanks to the eyewitness, who stayed behind and told police what happened. I’m choosing not to say his name here, because he may want to remain somewhat anonymous. I also need to give a big shout to the EMTs, who took care of the injured driver with compassionate bedside/roadside manners. I hope he’s ok. Finally, thank you to Onstar. I didn’t have to fumble for a phone, and look for a cross street. The red button connected me to an emergency dispatcher instantly, and she knew our exact location and where to send help.

A rough year for cars in the House family.  This was also crashed:  https://dennishouse.tv/2012/09/12/end-of-the-road-for-the-master-of-the-road/