FTS Flashback: Whalers Strike Deal to Stay in Hartford through 2013

Fans of the Hartford Whalers will no doubt grimace when they watch this Sunday’s Face the State Flashback. We have clips from an edition of Face the State taped in August 1993, when the program had an annual name change and was called CT-’93. Moderator Duby McDowell was explaining how the Hartford Whalers, the state and the city had come up with a deal to keep the Whale in Hartford for another 20 years.

That news was cheered by fans across Connecticut and the nation, including Richard LaCourciere of New Britain, shown here in ’93 showing his Whalers love when he was 3 years old.

Then Whalers owner Richard Gordon was a guest on the program talking about the team he loved, yet was costing him lots of money. Also on the show that day, Fran Murray, a businessman who was trying to buy the New England Patriots and move the team to Hartford. 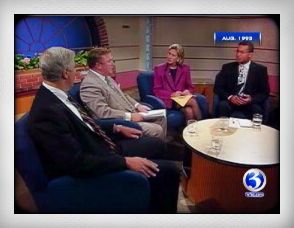 This is a fascinating find from our archives and shows how different the scene was only two decades ago. It’s also just a little bit depressing how none of it turned out as expected. The Whalers were later sold to Peter Karmanos, who moved the team to North Carolina. The Patriots flirted with our state two more times in the 90s, eventually signing an agreement to move to Harford, but then ended up staying in Massachusetts.

You can watch the entire flashback, that aired Sunday morning at 11 on WFSB Channel 3 right here. http://www.wfsb.com/video?autoStart=true&topVideoCatNo=default&clipId=9237419