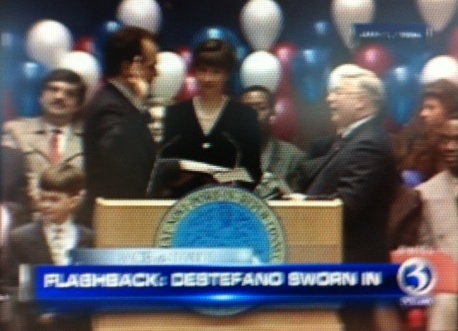 New Haven Mayor John DeStefano’s decision this week not to seek an 11th term rocked the state’s political scene and the Elm City. This week on Face the State take you back to DeStefano’s first day on the job.

January 1, 1994 was before the internet boom, a time when Lowell Weicker was governor, and people were excited about the upcoming Aerosmith concert at the New Haven Coliseum. The report from our archives shows DeStefano being sworn in, shaking hands with supporters, and then jumping into a job fraught with daunting responsibilities. The story was filed by Greg Coy, who is now in Memphis.

You can go back in time right here: http://www.wfsb.com/video?autoStart=true&topVideoCatNo=default&clipId=8303937

It is Super Bowl Sunday after all, we also have another flashback of another chapter in Connecticut’s pursuit of an NFL team. Here’s that: http://dennishouse.wordpress.com/2013/01/31/flashback-another-team-flirts-with-connecticut-the-hartford-buccaneers/

Our 14 year old dressed us up to take her and her friends to the @harrystyles concert at @mohegansun . While they screamed and danced to Watermelon Sugar @karasundlun and I hung with @alyssa_rae_taglia @jimmyaltman @tvwxman and their significant others See you this morning at 10 on WTNH for This Week in Connecticut