Behind the Scenes of Blue Bloods

I took a little break from politics and hard news recently to go behind the scenes of the hit CBS show “Blue Bloods,” seen right here on Channel 3 every Friday at 10PM. Photographer Jeff Kolan and I made the quick 100 mile trek from Hartford to a warehouse district in the Greenpoint section of Brooklyn that serves as something of an urban movie lot. 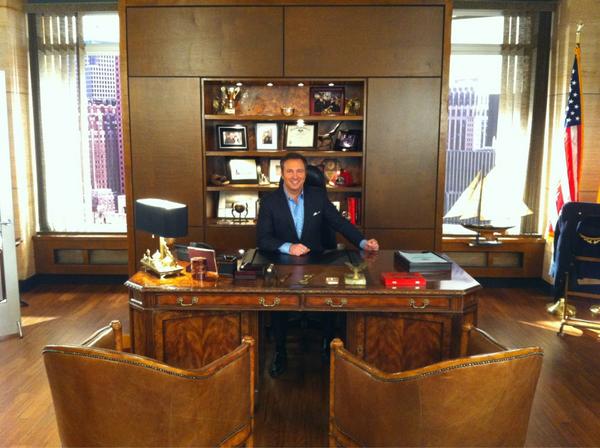 We were there mostly to talk to cast members, and to my surprise we were granted one-on-one interviews with every single star of the show. First up was Bridget Moynahan, who plays prosecutor Erin Reagan.

We talked about how she grew up in Longmeadow, Massachusetts and watched Channel 3 as a teenager. As it turns out, we have some mutual friends. My buddy Erik Szyluk and his family were childhood neighbors with Bridget’s. Bridget was great; “wicked nice” if I can break into my native Norwood, Massachusetts vernacular for a moment. Seriously, you could instantly tell by her demeanor she is very down to earth, and her Southern New England roots just might be the reason. And yes, in person, Bridget Moynahan does look exactly like the supermodel she is.

I was also looking forward to meeting Donnie Wahlberg, who plays tenacious NYPD detective Danny Reagan. Wahlberg is a native Bostonian who grew up in the Dorchester section of the city where my grandmother was born and raised. I’ve always respected him because he doesn’t run from his past as a member of the hit group “New Kids on the Block.” Some actors look back at what made them famous and avoid it. I’ll use Susan Dey as an example. Donnie and I talked about how he is really proud of the work NKOTB accomplished and where he came from. Kara and I are definitely getting a babysitter this summer to catch one of their reunion concerts. Donnie also revealed what to notice about Tom Selleck in the dinner scenes.

We also talked about how young kids in Hartford and New Haven can learn from him. Wahlberg made it out of a rough part of Boston to achieve great success. My favorite part of the interview is when he talks about the famous regular dinner scenes on “Blue Bloods” and the gastrointestinal music he creates after continually eating take after take after take. This is a guy you want to have a beer with….but maybe not after the dinner scene.

Every cast member was truly awesome to talk with. Len Cariou plays Grandpa, even though he is only 6 years older than his tv son, Tom Selleck. Cariou was very gracious and relishes the role as the Reagan family patriarch. He feels his role hits home with the viewers, and it certainly did with me. This past year, his character had to give up his driver’s license. We had a similar battle with my father-in-law. Read about that here: http://dennishouse.wordpress.com/2009/05/01/a-tough-decision/ 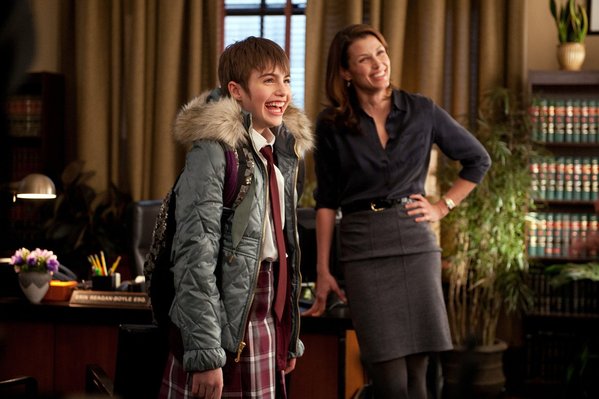 Sami Gayle was also very cool. She plays Bridget’s daughter Nikki, often seen in Catholic school uniforms. In real life, Sami is looking at colleges and shared her story about her trip to Connecticut. By the way, does anyone believe Bridget Moynahan looks old enough to be a mom to a teenager? 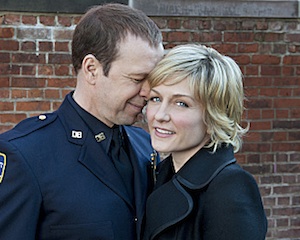 Amy Carlson, who plays Danny’s wife Amy, also chatted about Connecticut in her interview, and about her job at one of my favorite places. She worked at Wrigley Field in Chicago, and you’ll hear her talk about how that experience helped with acting. She and I have children the same age…and she told me she liked my shirt.

We also interviewed Will Estes, who portrays Jamie Reagan. We talked about his role as a Harvard grad and about his past as well. Did you know, Will is the one who played the teenager in the 2000 Bon Jovi video “It’s my life?” And he did his own stunts. Watch that right here: http://www.youtube.com/watch?v=vx2u5uUu3DE 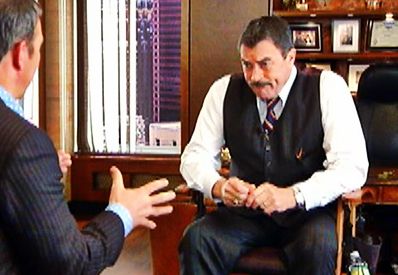 Our trip to Blue Bloods wouldn’t be complete without sitting down with the big guy, Tom Selleck. I saw him walking around the set with an assistant all day, and was told he was very busy and might not be able to talk to us, and if he did we had to be quick. I expected him to be a little intimidating, but Selleck came in and couldn’t have been nicer…even gave us more time than we expected. We talked about how fortunate he is to have been a star in two hit shows, “Blue Bloods” and the 80s powerhouse “Magnum, PI.”

By the way, from the small world department: the CBS marketing exec who handled the whole shoot turned out to be a friend of Kara’s from high school in suburban Detroit. Thanks, Amy Miller! 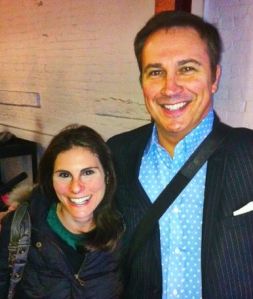 the last time I went behind the scenes: https://dennishouse.tv/2012/02/02/my-television-debut/