My co-anchor Denise D’Ascenzo and I have worked many an election night together and last night was an anniversary for us. Twenty years ago, we anchored our first election night as a duo.

On November 8, 1994, Denise and I reported the news from what was considered to be a temporary news set from our backup studio in the revered Broadcast House in downtown Hartford. The station had ditched our old purple, tan and pink set with the cockpit seating and was constructing a new state of the art set in its place. Here I am with Hilton Kaderli on the old set, with the old “3” logo that was also changed. 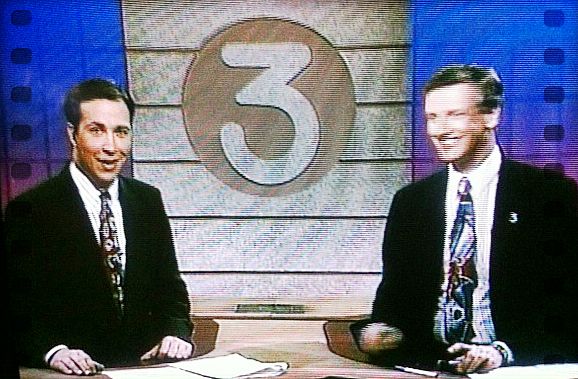 In the meantime, we anchored the news from that temporary set, which was anything but state of the art, featuring some striped wall covering and a semi-circle window picked out of the trash from the old set.

Over the years, we have brought the viewers of Connecticut the three elections of John Rowland as governor, the historic 2000 election between George W. Bush and Al Gore, the election of the nation’s first black president Barack Obama, and the gubernatorial nailbiter between Dan Malloy and Tom Foley in 2010.

For last night’s coverage, Denise and I wore some clothing that’s become a Channel 3 tradition. I broke out the same Brooks Brothers tie I first wore in ’94, and Denise hauled out what we call the “vintage voting vestment,” a velvet garment she debuted for an election night in 1998. The red jacket with the shoulder pads was donated years ago. 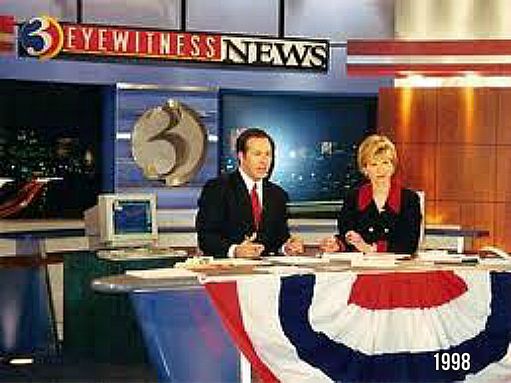 Denise noticed a seam starting to rip, so we are keeping our fingers crossed the historic frock will be around for the mayoral elections next year and the presidential election in 2016.

By the way, for that first election night in 1994, the big contest was the governor’s race. Independent Governor Lowell Weicker was not seeking re-election, and his lieutenant governor Eunice Groark was in an uphill battle against Republican John Rowland and Democrat Bill Curry. Rowland’s win that night was historic: at 37 he was becoming the youngest governor in the nation, and the first Republican elected to lead Connecticut in nearly a quarter century.

In the clip you’ll see below, in addition to Denise and me look for reporters Brian Garnett and Jeff Cole, along with comments from Rowland and Curry.

Also here’s the back story on the clothing: https://dennishouse.tv/2011/11/08/denises-vintage-voting-vestments/ 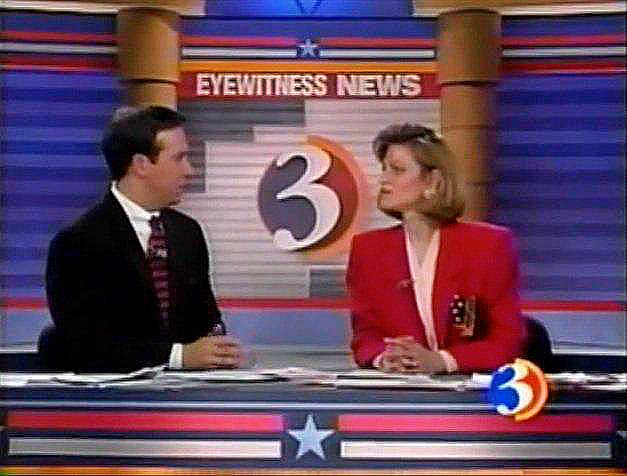