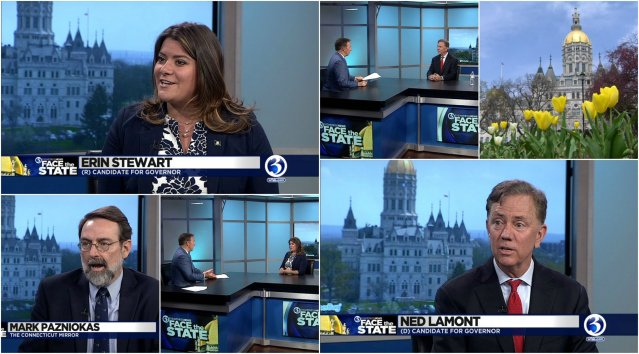 Face the State is often a place where candidates and politicians meet for the first time and bump into one another, not necessarily on television, but in our lobby or newsroom. Luke Bronin and Joe Ganim met that way as mayors-elect in 2015, Dan Malloy and Tom Foley crossed paths and shared a quick “how are you?” at WFSB during their acrimonious campaign in 2014 and last week gubernatorial candidates Ned Lamont and Erin Stewart exchanged warm greetings as they met face to face for only the second time.

The two were here to tape separate segments for Sunday’s Face the State, but I asked them both how they would run against each other.
LAMONT: “You don’t want the state going Trump red.”
STEWART: “I think it’s time for a new generation of leadership.”

Lamont was recently endorsed by Jonathan Harris as he dropped out of the race. I asked Lamont if he has asked rivals Susan Bysiewicz and Joe Ganim to support him and he said “no.” I also asked Lamont if he approves of Governor Malloy’s job performance. He didn’t answer the question directly, but said he (Malloy) has not fixed the problem. Would the state be better off had Lamont beaten Malloy in 2010? “I would have made more of the difficult decisions earlier.”

And what about the comparison some are drawing between Lamont and Republican Tom Foley?

Stewart told me she doesn’t think she’ll get the party’s endorsement at the convention, but believes she will get enough delegate support to qualify for the primary. Stewart who was thirty at the taping and had turned thirty-one by Sunday told me she’s also been asked to run for something else. “You name it, they’d said it. Everybody has tried to talk me out of doing what I’m passionate about.” We discussed the Hartford bailout, and what she supports.

We also had analysis from the Connecticut Mirror’s Mark Pazniokas