“The Post” is the big screen drama of how the Washington Post covered the story of the Pentagon Papers and battled the Nixon White House all the way to the U.S. Supreme Court for the right to print them.  It’s also the story of Post publisher Katharine Graham, portrayed by Meryl Streep, and her fight to keep the newspaper afloat while maintaining the journalistic integrity,  fiercely defended by legendary Post editor-in-chief Ben Bradlee, played by Tom Hanks.

Kara and I had the chance to see “The Post” this past weekend, and one of the characters in the film had special meaning for us.  Fritz Beebe, portrayed by Tracy Letts, is Graham’s closest advisor in the movie. He’s an attorney, who later became Chairman of the Board of the Washington Post company. His real name was Frederick, and his middle initial was “S.” 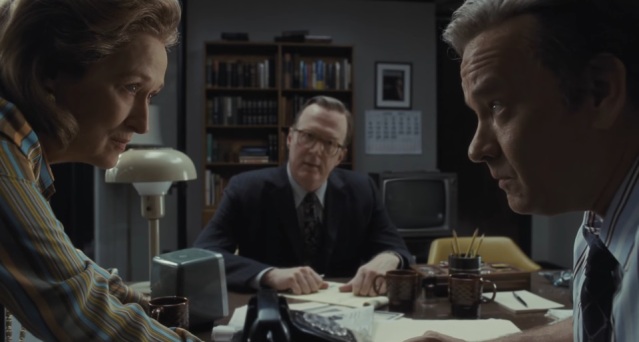 In 1974, after the Pentagon Papers and at the height of the Watergate crisis, Graham’s Washington Post Company bought Channel 3, then known as WTIC-TV. When the Post took over Broadcast House in Hartford in April of 1974, the call letters of the television station were changed to WFSB, after Fritz Beebe, who had died the previous year.

I had the privilege of meeting Mrs. Graham when she came to Hartford in 1997.  I was tapped to interview my big boss,  the publishing titan,  at a suite at the Goodwin Hotel, before her appearance at a Connecticut Forum at the Bushnell.   Mrs. Graham was kind, smart, and extremely interested in my career at her company as I was asking questions about her remarkable journey.

We talked about how I was inspired to go into journalism by two of her employees, Bob Woodward and Carl Bernstein, and she signed a copy of her then recently released autobiography.