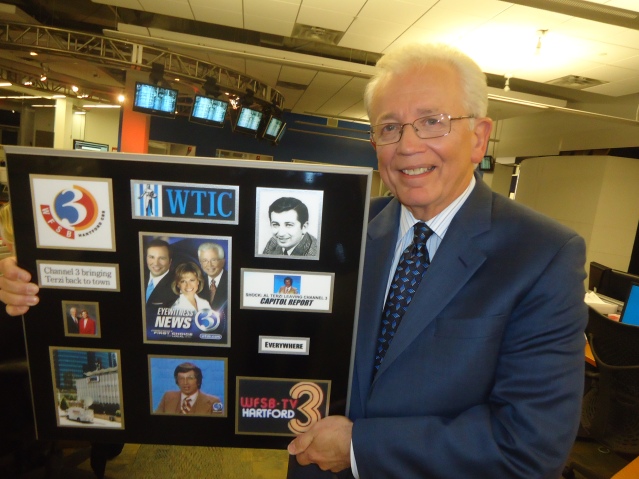 This week marks the end of an era in local television:  Al Terzi is leaving Channel 3.

“Big Al,” as we call him, first came to Channel 3 in the summer of 1968.    A decade or so later, he left for a job in Florida, where he survived a devastating plane crash.    When Al returned to Connecticut, he worked at WTNH, then re-joined Channel 3 in 1993.

Al is good friend and heckuva lot of fun.    In a business where we often have to report on the worst in human behavior,  it is nice to have a little levity now and then and Al would gladly partake in the silliness Denise and I so enjoy.   When Al would forget to sign off his computer, I would jump in send a preposterous e-mail to certain staff members, something like this:   “Can anyone recommend a good place to get a brazilian wax?”   Younger, newer,  staff members would murmur in twisted shock at this e-mail from Al, actually believing this military veteran  would undergo such a procedure!

Al always played along and was a good sport.   He wore a grass skirt, and footie pajamas  for Scot Haney’s Joy for Kids concert,  went along with good natured teasing about his age, and even tried a green jello shot at a St. Patrick’s Day party.

One of Al’s roles here at Channel 3 that the viewers may be unaware of,  was that of teacher.     His memos and notes on grammar, history and journalism are legendary.   I saved them for about a month or so and put them in a handmade book, called the “Terzipedia of JournALism.”  Here is one of my favorites from 2004:

In today’s Noon news, we referred to a “strip joint” as a “gentleman’s club”   “Gentleman’s club” is what the OWNER calls his business, so we should not use that term, because it’s misleading.    Viewers may be confused and think it’s a social club,” membership in which is something to be DESIRED.  Why not just call it a NIGHTCLUB FOR MEN?”   That’s not passing judgement.  That’s what it is.  By calling it a “gentleman’s club, we ARE passing judgment.     Thanks, Al

It was not uncommon to get an e-mail  from Al sent from home calling to our attention a mistake or an offer of new information about a story.   Some people might not have welcomed that missive, but they certainly learned from it.

We all learned from Al.  As anchors, I can say Denise and I are better at our jobs because of Al’s guidance.     He once told us he had two contracts; one with the station, the other with the viewers.   The dean of Connecticut television always made time for the people who watch us.

I’ll tell you a story that sums up what kind of guy Al is.   There used to be a mentally challenged man who waited outside Broadcast House nearly every day to greet us as we came and went into the television station.   He would take the bus downtown and sit outside our studios.   He knew our names and the stories that appeared on Eyewitness News.    Al would buy him lunch, and gave him comfort when his mother died.    That was Al.

For Denise and me, Al’s departure is a big loss.   Our desks have been at the same pod since 1999, when Gayle broke up our foursome when she left.    At the old Broadcast House, Denise, Al, and I used to take a daily “coffee walk,” either outside to Constitution Plaza or in the station lunchroom.    We’ve been there for each other at weddings, funerals, family dramas, and newsroom management upheavals.

On his final day here, Al got a standing ovation in the newsroom as he walked into the studio.   Well deserved.