As Channel 3 viewers know I was sent to Washington for a quick 48 hour trip to cover the Connecticut congressional delegation during the shutdown of the federal government. We returned home Thursday morning, and just hours later the chase and shooting took place that is now dominating the headlines.

Thank you to all the viewers who send me questions via twitter http://www.twitter.com/@dennishousewfsb and http://www.facebook.com/dennishouse3 Thanks to Christine Lee of WTIC 96.5 FM for the artwork above! I’ll explain the Spock ears in a later post.

This Sunday on Face the State we discussed the shutdown with Senator Richard Blumenthal, and he talked about what the options are and also shared his recollections of the Thursday’s shooting near the building that houses his senate offices.

We also had analysis from a panel of experts: Greg Bordonaro of the Hartford Business Journal, Peter Gioia of the Connecticut Business and Industry Association, and Ted Koppy, a financial advisor with Waddell and Reed and a former television anchor. 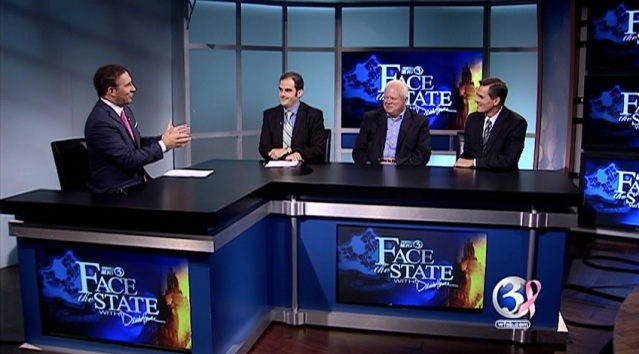 Tune in this Sunday at 11 AM on WFSB Channel 3. We also have two flashbacks: Duby McDowell reporting on the 1995 shutdown, and Brendan Keefe on a visit by author Tom Clancy to New London. Preview here: http://dennishouse.wordpress.com/2013/10/05/fts-flashback-tom-clancy-in-connecticut/

Here are some shots of my assignment in Washington:

By the way, I was sent to Washington with WFSB photojournalist Brian Elba. He and I have had plenty of travel assignments over the years including our memorable trip to the 1996 World Series.

What are we looking at? If you could smell through your television or phone this story would make you gag, but it is super cool and interesting. Brian Paganini @brian_pags will take us on a tour of a “mechanical stomach” that your takes your half eaten meal and turns it into “flatulence” then into energy. It is the wave of the future as Connecticut deals with tons of uneaten food and climate change. Watch Sunday morning at 10 on This Week in Connecticut on WTNH. #food #foodwaste #foodtoenergy #connecticut #hbj40u40 #southingtonct