I’ll Pass on Shopping on Thanksgiving and Black Friday, too 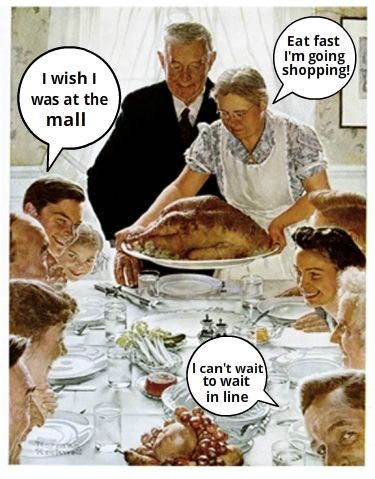 A little known media secret: we reporters tend to laugh at the people camping out in line on Thanksgiving waiting for the stores to open on Friday…the so-called Black Friday.

Something is really wrong with that. What could be so important inside that store to throw away a whole day? They could have been home having a Thanksgiving dinner, and don’t say they couldn’t afford it. If they could wait 18 hours for a $400 video game, they could have had dinner. For the record, I like getting bargains as much as the next guy, but I won’t be wrapped in a sleeping bag on cold concrete to get a good deal.

This woman below has been camped out in Tampa, Florida since November 22, waiting for the store to open November 29th. She told a reporter that “you can be thankful any day,but the sale is only on Black Friday.” 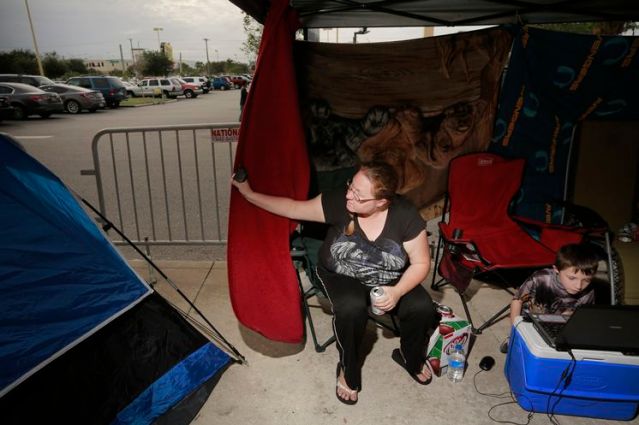 When the iPhone went on the market, we interviewed a high school student who skipped school to get one of the first phones, and the kicker: his mother called in sick to her job so she could sign the paperwork for him. What did she tell his principal? Keep in mind the phone was still going to be available when the boy got out of school in the afternoon. This is just plain wrong. But, thanks to the mom for doing that, because it gave the Eyewitness Newsroom a hearty guffaw.

We in the media are guilty for promoting this craziness. We encourage this madness with all our coverage of Black Friday even though as reporters interview sleep deprived shoppers huddled in the cold they are thinking “what’s wrong with these people.”

There are questions I want answered:

1. When you are camped out for 16 hours where do you go the bathroom?

2. Are you concerned your children are cold?

4. What are you teaching your children about the meaning of Thanksgiving?

Black Friday has turned deadly in some cases. In Staten Island, New York a Wal-Mart worker was trampled to death in 2008 the moment the store opened….crushed by a throng of shoppers who’d been camping out all night waiting for bargains. In California, two people were shot while arguing at ToysRUs. What kind of person brings a gun to a toy store?

Is it really worth it to go through all of this to save money?

I’ll wait for cyber Monday and celebrate Thanksgiving at home.