I was reminded recently that 25 years have passed since I got my first job in television news. It’s hard to say: 25 years. Yikes. It was late winter 1988 when I was hired at WMUR-TV in Manchester, New Hampshire to work on the assignment desk. My ultimate goal was to become a reporter, and this was my path to getting there.

For those not in the business, the assignment desk is the nerve center of a newsroom. The stories are assigned there and information is gathered there and passed on to the reporters and producers. The desk is a great training ground. Within a few weeks of being at WMUR, the assignment manager went on to work for then New Hampshire Governor John Sununu, and suddenly I was getting a promotion.

Even though I had new responsibilities, a fancy business card and a pay raise that had me pulling down just shy of $16,000 a year, I still wanted to be a reporter. After my shift was over, I would go out in the field with reporters and put together a demo tape, to send to news directors looking for inexperienced newbies who might have a mullet. I also came in on Saturdays and Sundays and went out in the field and did some practicing in the studio. That demo tape has never been on television until now.

In this past Sunday’s Face the State flashback, we aired the first report I ever put together, and it was political in nature. A hotel that had played host to presidents was being sold. In the link below, you’ll also see some clips of some pretty terrible anchoring, complete with some odd facial expressions and over-annunciations, telltale signs of a rookie.

That job at Channel 9 came after an internship at WPRI-TV, now the CBS affiliate in Providence, although it was ABC when I was there. When I got that unpaid job at Channel 12, I was beyond thrilled. Coincidentally, my wife Kara Sundlun was also an intern at WPRI years later.

That internship was an intense learning experience that remains a foundation of my career to this day. I learned everything from how to write for tv news to how to go out and get the news. Most importantly, I learned how the business worked.

You learn from everyone you encounter in life, and WPRI was no exception. I was helped by dozens of people, but I’ll always be grateful to two WPRI anchors at the time, Walter Cryan and Ted Wayman. Walter was a senior statesman-like newscaster, who gave me an avuncular “don’t worry about it,” after I messed up the teleprompter one night. 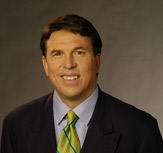 Ted was particularly helpful, and told me if I really wanted to learn something, I should intern on the weekends, when the station had a considerably smaller staff. Ted was the weekend anchor, and probably felt an extra body on Saturdays and Sundays would be a big help. Changing my schedule to the days most people want off, was the best move I could have ever made. I went out out to stories with a photographer, and we covered everything from fires to senators to college rallies. Ted was a great writer and story teller, and was very influential in the style of reporter and anchor I would become. A few years later when I sent my mother a tape of my first anchor job in Rockford, Illinois, and she said “you sound like Ted Wayman,” I knew I was doing something right. I’ve also tried to return the favor by mentoring WFSB interns over the years.

I also have to give a shout-out to my news director at WMUR, Miles Resnick, who later authored a book about the tv news business. He coached me in the studio, and I’ll never forget his paternal yelling “don’t move your head so much!” He also told me to get a haircut.