Malloy to Hit Road to Rally Support for Budget Plan; Mum on '14 Run 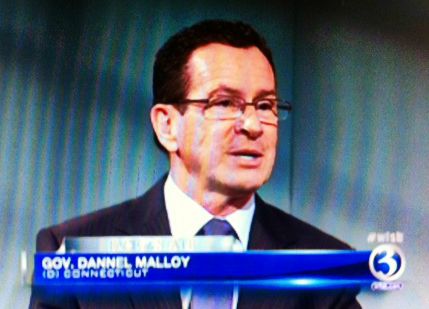 Governor Dannel Malloy is planning on a statewide tour to drum up support for his budget plan, unveiled Wednesday. A spokesperson tells Eyewitness News the first stop will be in Stamford.

The governor was our guest on Face the State this Sunday to talk about the new budget, Newtown and other topics. The governor explained his reasons for calling for the elimination of the car tax, which he opposed during a taping of Face the State in 2006 when it was proposed by then Governor Rell. Malloy called it a “totally different plan.”

We also talked about the state of economy, and why he thinks the state is going in the right direction, when his potential Republican opponents in 2014 feel the opposite. The governor wouldn’t talk about his re-elections plans, but it is widely expected he will run for a second term. When asked if there was a chance he won’t run, the governor would only say “I love this job.”

Other issues we discussed Sunday: Newtown, state employee unions, the large amount of leadership positions in the state legislature, and the future of professional and college sports in Hartford. Read about that here: http://dennishouse.wordpress.com/2013/02/07/malloy-had-i-been-governor-the-whalers-would-still-be-here/

I also showed the governor a new virtual set for Face the State that is in development. I jokingly call it the “Malloy Conspiracy” studio, because its chroma keying technology design (green screen) would lead to a ban on the governor wearing his trademark green ties. Incidentally, Governor Malloy wore blue for this week’s taping.

You can watch the entire interview with Governor Malloy that aired Sunday morning at 11, only on Channel 3 right here: