The Art of the Announcement 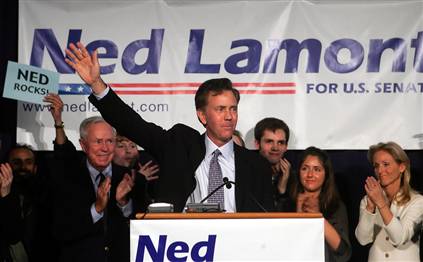 Ned Lamont  is getting ready for  an announcement regarding his political future.   It is expected he will throw his hat in the ring in the race for governor, and in terms of the announcement itself, he is getting off to a good start.

The way a candidate begins his or her campaign is vitally important.  The goal is to get maximum media coverage.    Making the announcement in Hartford is the first step.

The capital city is the media capital of  Connecticut, and making an announcement there pretty much guarantees you the most coverage.  Just about every news gathering organization in our state has a reporter stationed in Hartford to cover the State Capitol.  Television stations WFSB, WVIT, WTIC and CPTV are located in the city or the suburbs and WTNH has a newsroom in the city.    The state’s largest newspaper is in Hartford, and the state’s most powerful radio station is in the Hartford burbs.  Ned Lamont and his advisors get this.   Lamont will make his announcement at the Old State House in downtown Hartford.

Some candidates want to announce in their hometown.   I’m not sure this would have worked for Lamont.   His advisors probably cautioned that some voters might be turned off  by seeing his face on television with a graphic that read “Greenwich” at the bottom of the screen.

Jim Amann chose to make his announcement in his native Bridgeport.  Not a good call.  Ditto for Mark Boughton who chose Bethel….at 6PM.  More on that later.

Channel 3 along with Channels, 8, 30 and 61 are part of the Hartford/New Haven television market.  Fairfield County is not included in that coverage area.  People certainly watch us in Fairfield County, but the FCC has assigned that part of our state to the New York television market, even though Bridgeport and Danbury are closer to Hartford than New York City.    That market distinction impacts the way we cover news.

We cover the daily happenings in the Hartford/New Haven market which gives a  tremendous advantage to candidates from that area.  In 2006 if candidate for governor and New Haven Mayor John DeStefano held a news conference regarding crime statistics, the stations were there and he was on the 6PM news.   If his opponent, Stamford Mayor Dan Malloy, held a similar news conference, we weren’t there and he wasn’t on the evening news.  The New York stations should be covering the daily news of Stamford, but honestly, they could care less.

Malloy understood this, and has a made a tremendous effort to spend time in the Hartford/New Haven area, be it on “Face the State” or at the capitol.   If he decides to run this time, look for his announcement to take place in Hartford.

Back to Boughton’s announcement.   Bethel on a Monday at 6PM.   A bad call all around.    Bethel is in Fairfield County, and that meant a commitment by a television station to have a satellite truck in Bethel during a newscast .     Boughton’s campaign kickoff was not covered as extensively as it should have been because of the location and the time.   Holding a news conference during a newscast is risky.  There is a slight chance it will be carried live, but there is a much greater chance the stations resources will be tied up elsewhere, and it won’t be covered at all.     Boughton did not get the maximum media coverage.

Oz Griebel kicked off his campaign with two announcements:  one in Torrington and of course, one in Hartford.  Tom Foley had his in Hartford, but that wasn’t handled well.   He didn’t take questions, and was criticized for it.   Lt. Governor Michael Fedele announced at a business gathering in Cromwell.

None of the Senate candidates planned their announcements particularly well, with Peter Schiff being the worst.  He went to New York to announce a run for a Connecticut senate seat on cable network MSNBC during the program “Morning Joe.”    A person close to Schiff told me it was an effort to make one single announcement to a large audience.   Problem was each of the local  television stations has a larger audience in Connecticut than “Morning Joe.”    The amount of voters who watched Schiff’s announcement was pretty small… rivaling “Dora the Explorer” on Nick Jr.

If I were advising a candidate, I would recommend having a campaign kickoff  midday on a Wednesday.  Midday allows the television and radio crews to put together stories for the evening news and afternoon drive.   It makes the newspaper on Thursday.  I’m told readership is high on that day.  Plus, some newspapers like the Hartford Courant  are offering Thursday through Sunday delivery packages because readership is down early in the week.

Also…take some questions from reporters and get yourself on “Face the State!”