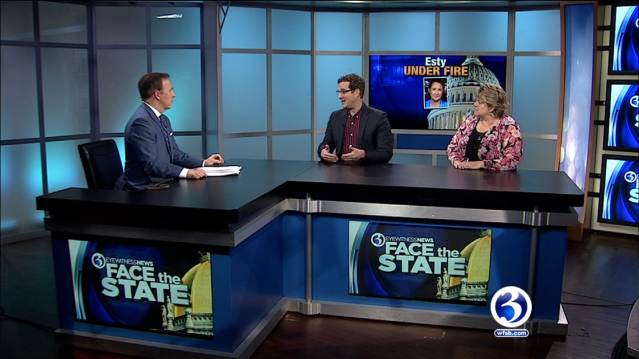 The fallout continues from the fall of Congresswoman Elizabeth Esty. We invited the Cheshire Democrat to come on Face the State this Sunday, but her chief of staff Tim Daly told us she was unavailable. We are joined this Sunday by Jeff Cohen of WNPR and Cindy Wolfe Boynton, the president of the Connecticut chapter of the National Organization for Women.

Cohen shares with us the threat his organization received from chief of staff Daly, and he gives us some insight on the severance Daly’s predecessor Tony Baker received despite allegations of abuse and sexual harassment against him. It’s a fascinating conversation.

Boynton weighed in with mixed feelings. NOW endorsed Esty and admired her work on behalf of women, but that has all changed. Boynton said Esty’s response to the allegations were unacceptable and she should have involved police from the beginning because “this man was clearly an abuser.” “The accuser gets everything and the victim gets nothing.”

DH: “Is she still a champion for women?
CWB” “The easy answer is no….I think there is a little more gray there. “

Also on the program, one of the first Democrats to call for Esty to resign, Susan Bysiewicz. The candidate for governor talked to me about the difficult conversations she had with Esty and the scandal could impact the Connecticut Democratic party. Bysiewicz also talked about potential convention scenarios with her fellow candidates, and what she would do in her first 100 days in office. What about tolls, casinos and marijuana? The answers on Sunday.

Our flashback takes us back to 1968, and Hartford’s reaction to the assassination of Martin Luther King, Jr. I’ve been unable to find old film from the WFSB archives from that part of 1968, so we are using some photos from our friends at the Hartford Courant. You will hear from Ann Uccello, who was mayor during those tense days.

See you Sunday morning at 11AM on WFSB.