Bhargava Takes on Drew as Campaign 2018 Heats Up 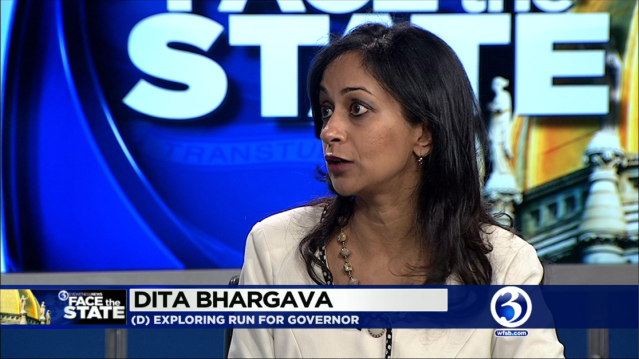 Sunday on Face the State we continue our look at the candidates and potential candidates for governor with Dita Bhargava, a Democrat from Greenwich.

Bhargava has never held elected office before, and touts her experience in the business world as she calls herself “a different type of Democrat.”     During our taping she explained what that means, and you’ll see it on Sunday.

I also asked her about the other Democrats in  the race, namely Middletown Mayor Dan Drew, of whom she has been critical in the past, specifically over reports he solicited campaign contributions from city workers.

“I don’t think Dan Drew made a mistake.  It was a calculated decision that was unethical.”

I asked Bhargava if Drew should stay in the race.

“I think if he is  candidate of the Democratic party and is under investigation it is not going to do us well.”

Bhargava is also a Clinton Foundation Ambassador. How will that play with independents and Republicans, and how is she different from Governor Malloy? Tune in Sunday.

Also on the program, State Senator Toni Boucher and State Representative Mike D’Agostino will talk the budget and our flashback is rare old film from our archives of President Kennedy in Connecticut.

See you Sunday at 11 on Face the State.