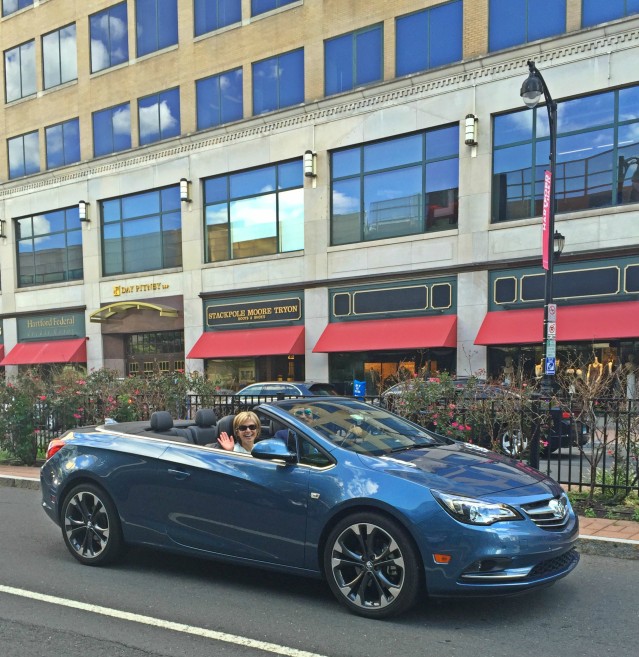 “What’s new downtown this month?” Denise D’Ascenzo asked me recently. I started to explain how Hartford has been rapidly changing and we decided the best way to understand the changes was to experience them with a tour.

Back in the day when WFSB was at Constitution Plaza, Denise and I regularly walked around downtown between the newscasts to grab a bite to eat, chat with viewers, attend events, get some exercise and see some sights.  Over the years we would stroll to the Civic Center, Bushnell Park, the Connecticut River and to the brownstone on Capitol Avenue where I once lived to say hi to Kara and later our daughter. As a shoreline resident, coming to work was Denise’s only Hartford experience and she looked forward to it. But so much has changed since 2008.

We started our combo walking and driving tour at Adriaen’s Landing, which the last time Denise had the opportunity to closely check out, only consisted of the Marriott and Convention Center. The Connecticut Science Center was under construction and the Front Street part of Adriaen’s was just a vacant lot.  I took her to Bear’s Smoke House for a quick lunch and then showed her the new Spotlight Theater, Infinity Hall, and the UConn Hartford campus under construction. She’s been reporting on these new places and was of course very knowledgeable of them, but wanted to see them up close and personal

Denise was amazed at all the new apartments and the iQuilt progress at Bushnell Park, and comforted by the scene of some familiar haunts from the old days: the Arch Street Tavern, Black Eyed Sally’s, Salute, Max Downtown, Stackpole Moore and Tryon, and several others. She also remarked about the new eateries in town and the increased number of people on the streets.

Denise had never seen Dunkin’ Donuts Park in person so we went by there, and to the Spectra apartments, which used to be an old abandoned hotel next to the site of the long demolished Broadcast House.  Sniff.  When the hotel was open in the early 90s, it served as a place to get quick food and a convenient place to unwind with colleagues over refreshments.

I might have missed something during our tour, so check out Mike McGarry’s recent Hartford Courant column that covers the progress our capital city is making: http://www.courant.com/opinion/insight/hc-op-insight-mcgarry-hartford-coming-together-0904-20160902-story.html

McGarry writes in depth about the changes still to come, and I’d like to see a few more.

More signage visible from the highway might beckon passersby to get off at the next exit. I also think we need a cobblestone street somewhere downtown to reflect our colonial heritage. Boston, New York, Newport and other old cities have them and it adds character and gives people a sense of history. Lewis Street or Allyn Street could be good choices. Denise and I also lamented the closing of the Old State House. The gift shop back in the days of Wilson Faude was pretty amazing for cool Hartford gifts. Where do you get that stuff that now? Speaking of the 18th century landmark, remember the cannon set off by guys in revolutionary attire? Miss that, too.

Downtown still has a way to go, but is headed in the right direction and has a pretty bright future. I encourage you to take a tour and explore. Next time I’ll take Denise to some of the other neighborhoods in the city, which are also undergoing some big changes.