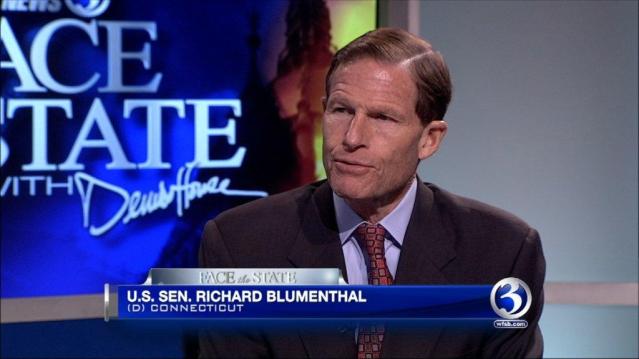 Some say it signals the beginning of a new Cold War, or the re-creation of the Soviet Union. This week we are talking about the crisis in Ukraine with our state’s senior senator, Richard Blumenthal.

Blumenthal supports sanctions against Russia over military action, but expressed concern about the situation.

Dennis House: “Can Vladimir Putin be trusted, in your opinion?”
Senator Blumenthal: “In my view, no, because he has shown us from his latest actions that he is untrustworthy.”

The Senator and I also talked about the Affordable Health Care Act, commonly called Obamacare, and its negative impact on some of his senate colleagues who face tough re-election battles. Blumenthal shared his view on why the ACA seems to be more successful here in Connecticut than other states.

In addition, I asked the senator to weigh in on the Charla Nash case. The Stamford woman blinded and disfigured by a chimpanzee wants to sue the state, but can’t unless she gets permission. That’s the way it is according to an old Connecticut law that dates back hundreds of years.

“I think people should be as free as possible to sue the state of Connecticut. We have a doctrine of sovereign immunity it is because state is a sovereign entity, and so people wanting to sue the state need permission from this official called the claims commissioner. I think that whole system may need to be revisited so that people who have a substantial claim are held to a different standard. Not in every case; we don’t want to squander state resources”

You can watch the entire interview with Senator Blumenthal this Sunday morning at 11AM on WFSB Channel 3.

Here is a preview of our flashback from February 4, 1986 https://dennishouse.tv/2014/03/20/that-day-when-all-eyes-in-the-sports-world-were-on-hartford/

We are also interviewing the newest candidate for governor: https://dennishouse.tv/2014/03/20/q-poll-persuaded-dean-to-run-for-governor/