The Republicans have lost nine U.S. senate elections in a row in Connecticut.   This week on Face the State were  joined by the last Republican to win a senate seat,  Lowell Weicker.

Weicker, who turns 81 next month,  delivered a blunt assessment of the Connecticut Republican party:  they are irrelevant.    However, due to the irrelevance of the state GOP, according to Weicker, the Democrats are solely to blame for the financial mess our state is in.

“There is no reason why the state of Connecticut should be in the fiscal condition that  it is in.  It is there, literally, because we have a one party state.  The Republicans have become irrelevant to the constituency which is Connecticut.” 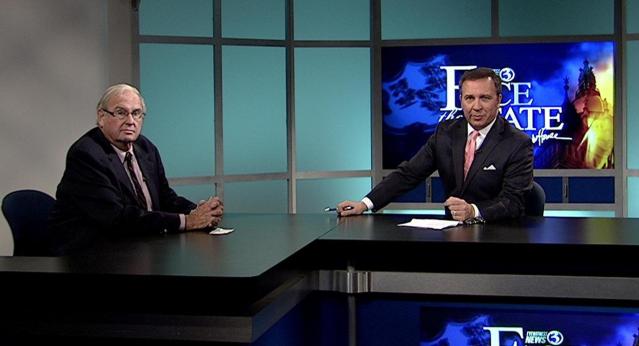 Weicker, a Republican who later turned independent and was elected governor, stressed his support for President Obama,  but suggested the President may be the only Democrat he supports this year.   “I want to do everything I can to see the Republicans succeed in the legislature, the house and senate, maybe some of the other races.”

Weicker also talked about his career, Governor Malloy,  the senate candidates and the debates.   He was very impressed by Brian K. Hill and Hill’s call that the GOP spend some time in the cities.     Hill also got a shout out on Face the State during our analysis segment with Don Pesci and Colin McEnroe.

You can watch the entire interview with Lowell Weicker, right here: http://www.wfsb.com/video?autoStart=true&topVideoCatNo=default&clipId=7088307

Weicker is also the subject of this week’s Face the State Flashback.  :  http://dennishouse.wordpress.com/2012/04/27/face-the-state-flashback-ct-senators-presidential-ambitions/

Great honor to be a guest on the “Friends of Feeney” @friendsoffeeney podcast hosted by a 24/7 Good Samaritan and great guy Eric Feeney, a West Hartford schoolteacher. It was produced by @dlm_pro whom I worked with years ago. Check it out wherever you listen to podcasts or watch on @youtube Friends of Feeney episode 25. #friendsoffeeney #weha #wtnh #hartfordwhalers #hartford #podcast