Had there been Twitter 50 years ago, the above headline would have been tweeted around the world. Every so often I’ve been asked if our popular Face the State flashback segment could feature Channel 3 coverage of some breaking news that happened in New Haven on December 9th, 1967. That night, the iconic lead singer of the Doors, Jim Morrison, was arrested while on stage at the New Haven Arena, which was demolished about 40 years ago.

I have thoroughly checked the WFSB archives and have come up empty-handed. Sadly, some of our old tapes and films were thrown out years ago and some valuable history has been lost.

As the story goes and you can google the details for more information,  Morrison was maced by a New Haven police officer while doing something with a young woman in a stall before the concert. Later on stage, Morrison told the crowd about it and poked fun at police and was led off stage by officers, who later charged him with lewdness. Although our news coverage of the event is missing, I did find this video on YouTube shot by a fan: 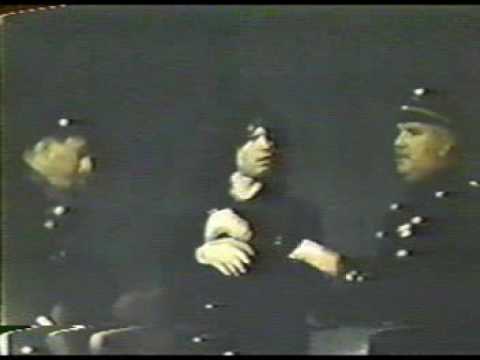 Here is clip from Oliver Stone’s movie “The Doors” depicting the incident:

Morrison later referred to the New Haven arrest in the song “Peace Frog.”

In the spirit of full disclosure, I should mention I am a big Doors fan, even I didn’t know anything about the Doors until long after Morrison was dead and the Doors were defunct. I think my parents had a Doors album.