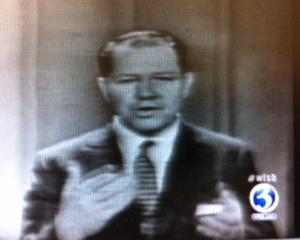 To mark the renaming of Grove Street in downtown Hartford after the legendary broadcaster Bob Steele, we have pulled some vintage film of Steele from his years at Channel 3. While most people remember Bob for his years on the radio, he is also a key figure in Connecticut television history.

WTIC AM 1080 and Channel 3 used to be one big family until 1974, when the Travelers sold Channel 3 to the Washington Post, which led to our change in call letters to WFSB. The insurance giant later sold off the radio division, too. Grove Street, at the base of the majestic Traveler’s Tower, was the ancestral home of Channel 3 before the state of the art Broadcast House opened at Constitution Plaza in 1961.

Bob was an established name on the radio for a while when Channel 3 debuted in 1957, so he was the obvious choice to host our opening night before a live audience. You’ll see that old film this Sunday in our Face the State, and chuckle as Bob deftly handled a series of technical problems.

I also uncovered some old footage of Bob anchoring Channel 3 coverage of the 1963 Yale Harvard regatta on the Thames River. This clip is classic Bob Steele, that showcased his command of the English language he was so known for.

In addition, we will show you Bob’s last official sportscast in 1966, although he continued to work on television after that, and on radio for the next three decades.

You can watch the entire Face the State flashback, this Sunday morning at 11 on WFSB Channel 3.