22 months from now voters will go to the polls to choose a governor and the 2014 ballot could be identical to the one voters saw in 2010. Republican Tom Foley is planning to seek a rematch against Governor Dannel Malloy, and laid out his case Sunday on Face the State with Dennis House, on WFSB-TV (CBS) Hartford.

If you think it is too early to start running for governor, remember that then Stamford Mayor Malloy said he would run for governor during an appearance on Face the State on January 15, 2009, with 22 months to go before the 2010 election. “These are dramatic and dangerous times, and I am prepared to run for governor.” Stamford Mayor Dan Malloy 1/15/09 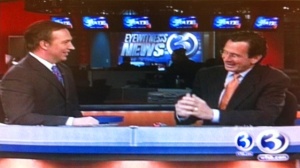 The former U.S. Ambassador to Ireland was highly critical of Governor Malloy and said he plans on laying the groundwork immediately for a change in leadership. “I agree with the Governor that the state is in dire straits and we need new leadership.” Foley said the state is spending too much and “we are taking the state off the cliff.” Foley also did not hold back in critiquing the Malloy’s administrations tax hikes and dealings with state employees unions.

Foley, who lost to Malloy by 6,400 votes in 2010, also said he might have done better had a woman been the candidate for lieutenant governor, although he said Danbury Mayor Mark Boughton was a great running mate. Boughton, along with house minority leader Larry Cafero, are also said to be considering runs for governor. Only one Republican woman has expressed interest in running, State Senator Toni Boucher. State representatives Themis Klarides, Penny Bacchiochi, and Pam Sawyer are other names suggested as potential candidates, either for governor or lt. Governor, along with Darien First Selectman Jayme Stevenson. The last all-male ticket to win the governorship was in 1986.

We also have analysis on Foley's comments and the 2014 race with Christine Stuart of ctnewsjunkie.com and Rick Green of the Hartford Courant. You can watch the entire interview with Tom Foley right here: http://www.wfsb.com/video?autoStart=true&topVideoCatNo=default&clipId=8138457