From Detective to News Anchor 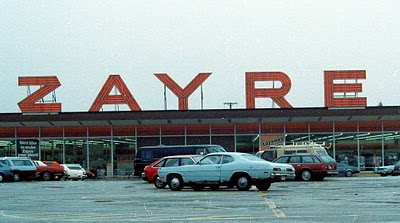 The shooting of a loss prevention officer at the Macy’s at the Buckland Hills Mall is a frightening story that shocked many people.   It happened during a suspected shoplifting incident and we are hoping he makes a full recovery.

The incident reminded me of a job I held many years ago with the similar responsibilities.  We weren’t called loss prevention officers, but rather store detectives.

I  worked as a store detective at Zayre’s in Dedham, Massachusetts, near my hometown of Norwood.   It was a fascinating  experience that taught me plenty about retail, people, and crime.

As I recall, the  team consisted of three or four of us;  one at the front door, and the other three spread out across the store and perched in the lookout.   There was a retired or off duty police officer on the staff whom we reported to if we spotted anything suspicious.   This was the 80s, before security cameras were the norm, and the lookout was a concealed area high above the store, where we had a bird’s eye view of the aisles.   We also relied on security mirrors.

I liked that job because basically I could wear whatever I wanted, except on days I had to make my presence known and work the entrance.    On those days, I would wear a tie and had to do a quick assessment of customers walking through the front doors.   If someone was wearing a winter coat in July or was carrying an empty looking backpack, that would qualify as suspicious and we’d keep an eye on them.    The hope was that an intimidating stare would  discourage any shoplifting, although it didn’t always work.

Often though, I worked incognito.    If I was coming to work from the beach, I could wear shorts and a t-shirt, after all store detectives have to blend in with the customers.  We would walk around the store, sometimes pushing a shopping cart, while keeping an eye on potential thieves.

There were plenty of them.    We caught people who put on clothes in the fitting room and then tried to walk out wearing them.   One woman paid for  a trunk and didn’t think we’d notice that she’d filled it will goodies.     Another tried walking out with a television in the cart, wrongly assuming that we would think that nobody would ever try to steal such a large item.    People tried everything, even using their children as decoys.   Shoplifting was so widespread, it was impossible to catch everyone.

Still, we never saw anyone doing what the guys on the news are accused of doing.  Thank God for that.

By the way, thanks to the great Pleasant Family Shopping blog for some Zayre’s pictures.  This is a very cool read:  http://pleasantfamilyshopping.blogspot.com/

also read about another job: http://dennishouse.wordpress.com/2012/02/02/my-television-debut/

Happy Thanksgiving! As president of the Denise D’Ascenzo Foundation I was honored to help present a check for $5000 dollars to Connecticut Foodshare! DDF Vice-President Kara Sundlun was also on hand along with our kids who have great memories of their Auntie Denise. Foodshare CEO Jason Jakubowski told us that money will provide 10,000 meals for needy people in our state. Thanks to all of you have donated to @thedenisefoundation. We invite you follow the DDF on Instagram to keep informed about future events.