Connecticut Getting Some Rhody Love

It’s not often our state is praised by our smaller neighbor to the east.    Rhode Islanders love to say their capital city is better than ours, their beaches are better, and their gas prices are better.

Much to my pleasant surprise,   when I flew out of Green Airport last week I saw Hartford Whalers gear for sale prominently featured at the “Only in Rhode Island” store at the Sundlun terminal.       The sales clerk told me it sells pretty well, too.   Another store in the terminal was also hawking Whale wear, right next to Boston Bruins gear. 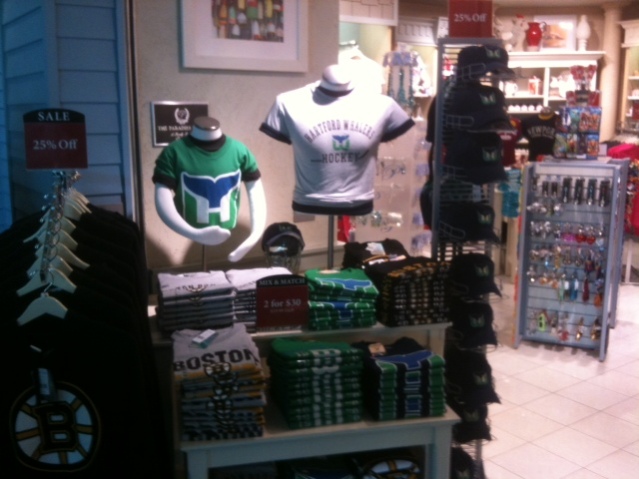 Later, as I was waiting for my flight, I spotted this guy with a really old Whalers logo hat.

The next day at the beach along Lake Michigan in Chicago, my friends and I watched in amusement as this dude with a Whalers hat and his friend successfully persuaded two young women to let them join them at their table at a restaurant.

We figured it was the power of the iconic logo of our beloved defunct team that facilitated whatever pick-up line they used.    Twenty minutes later he blew it when he lit up a cigarette and the girls skated  out of there leaving their dejected potential suitors behind.

what the governor says:  http://dennishouse.wordpress.com/2012/07/09/governor-malloy-unlikely-nhl-will-return-to-connecticut/

plus:   what an ESPN anchor had to say