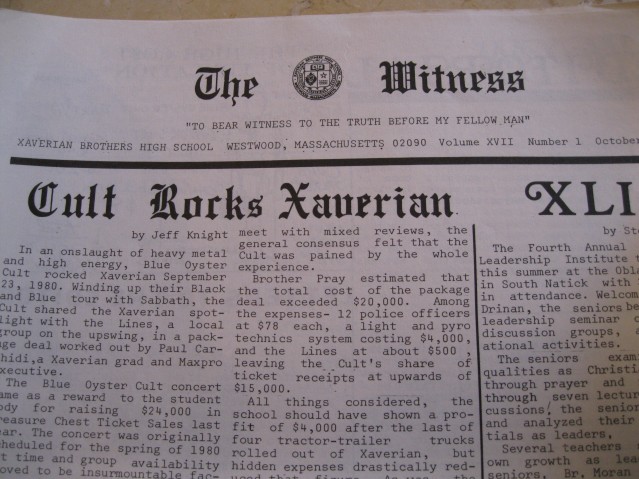 When I was in high school I had the task of writing an endorsement that would appear in our school newspaper.  In an effort to avoid favoritism in the election of 1980, “The Witness” at Xaverian Brothers High School actually published three endorsements; one for President Jimmy Carter, one for Republican Ronald Reagan, and one for independent John Anderson.   I was assigned to write the one for President Carter.

Teenagers  are often influenced politically by their parents and at that time, my folks were what I call “Kennedy Republicans,”  sort of like “Reagan Democrats.”    Like many people in my Boston suburb of Norwood, they supported John Kennedy in 1960 (though they weren’t old enough to vote for him,) but drifted away from the Democrats during the malaise of the Carter years which overlapped Michael Dukakis’ first term as governor.

My grandmother held firm for the Democrats, and she often referred to “her” presidents by their first names as if they were members of the family.   “Franklin did wonderful things,” Nana would say, or “it was so sad when Jack was assassinated.”  My aunt even had a dog named Lyndon Baines.

However, in my house,  the bloom was off the Democratic rose by the end of the 1970s, when   Massachusetts was living up to its nickname “Taxachusetts.”  I remember my mother and father always complaining about President Carter, the high gas prices, the Iranian hostage crisis, widespread unemployment, record high mortgage rates, even the boycott of the Olympics.    I vividly recall one morning as I was eating breakfast before school, the images  on television of a  disastrous failed  attempt to rescue the hostages.   Eight U.S. servicemen were killed.

Back to my endorsement of President Carter.  Considering my environment and the times, it was tepid…at best.   Here is an excerpt:

“Jimmy Carter is not the ideal candidate for the presidency, but he is the best being offered to the American electorate this year.    It is true that his administration has been a disastrous disappointment.  However, he is our president, our leader.  He is the only candidate who can claim this qualification……” 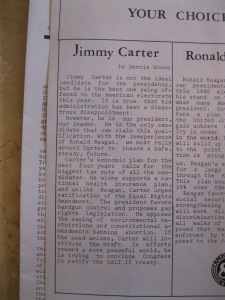 Carter was also not very popular among the student body, most of whom wanted change.   A poll published in the same edition of “The Witness” as my Carter endorsement , showed Reagan with 36%, Anderson with 28%, undecided with 19% and Carter with 15%. 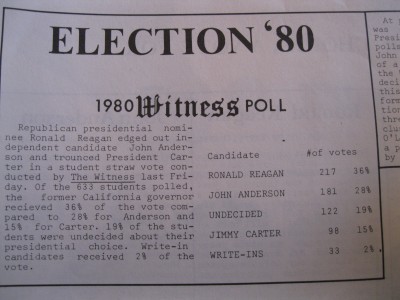 I wasn’t old enough to vote in 1980, yet I studied the election with tremendous fascination.  The subject of one of my papers that fall was Ted Kennedy’s run  against Carter for the Democratic nomination.

By the way, if you are wondering what’s up with the headline “Cult Rocks Xaverian,” that refers to Blue Oyster Cult, whose performance in our school gym bumped the Election of  ’80 off the front page.   Ah..to be 16 again.

Always great to hang out and learn from @ronninewton of @westhartfordite and @townofwesthartfordct Mayor @sharicantor. We’re talking about the future of the restaurant business in this pandemic world. They’re two of my guests this Sunday morning at 10 on This Week in Connecticut with Dennis House on WTNH. #connecticut #savectrestaurants #wtnh #weha