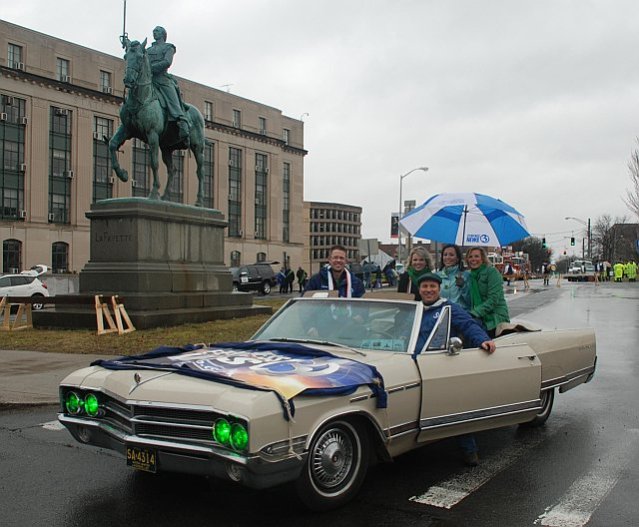 One of my favorite days in Hartford is the St. Patrick’s Day parade.   It gets bigger every year, and even though the rain kept some people home, it was still a very good turnout.   Marchers come from all over Metro Hartford and spectators number in the tens of thousands.

I did notice fewer families this year, and that was to be expected considering the weather.  It was raw, wet and cold.  In fact, Kara stayed home with the kids while I was in the parade with some of my Channel 3 colleagues:  Irene O’Connor (whose husband stayed home with their kids,) Hallie Jackson, Heather Hegedus, and Mark Dixon.     We decided to put the top down on the 1965 Buick Electra and really we didn’t get too wet.

Parade goers fill up the sidewalks, stoops, and bars.    This was the scene outside McKinnon’s on Asylum.

If you have youngsters you may not want to camp out in front of a bar, so I would recommend Bushnell Park or the Wadsworth Atheneum areas.   Great places to see the parade, alcohol free.

My favorite stretch of the route is Capitol Avenue between Hudson Street and Main Street, my old neighborhood:  SoDo, for South Downtown.  The folks who live there and across the street in the Linden look forward to parade day for months.  They throw parties, decorate their brownstones, and give the parade marchers a boisterous reception.    I’m always amazed by the people who are stunned that there is fun in their own capital city.   Whenever people would visit our neighborhood they were pleasantly surprised to learn that young professionals lived there, lots of them.  This past weekend, I met someone from West Hartford who has never been to the parade.    That stunned me.

Here is a picture fellow blogger Kerri Provost took of us in a rain drenched SoDo:

When Kara and I lived there we were part of the celebrations for several years, along with Irene and her husband (they were our neighbors on the block.)   Now that we have children we live in neighborhoods with yards and swingsets but we fondly remembers those parade days on Capitol Avenue.     We still get people (Al Terzi, Scot Haney) and others who miss coming to our home to watch the parade. 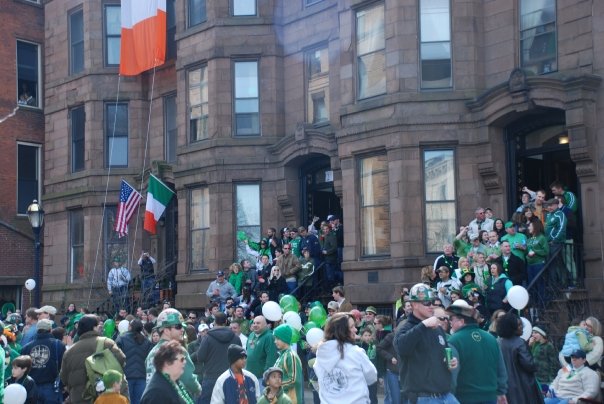 Mark your calendars for March 12, 2011.  Plans are already underway for next years’s parade.

Our 14 year old dressed us up to take her and her friends to the @harrystyles concert at @mohegansun . While they screamed and danced to Watermelon Sugar @karasundlun and I hung with @alyssa_rae_taglia @jimmyaltman @tvwxman and their significant others See you this morning at 10 on WTNH for This Week in Connecticut