So, our little daughter is now a cover girl! Shortly after Helena was born, we got a call from Hartford Magazine publisher Michael Guinan, asking Kara and me if Helena and her daddy could be on the cover of the June issue for Father’s Day. Kara and I talked about it and thought it would be very cool and our daughter would get a kick out of it when she gets older: 4 months old and she is on a cover, sharing the newstand with another baby who is on the cover of Us Weekly: Shiloh Jolie-Pitt. 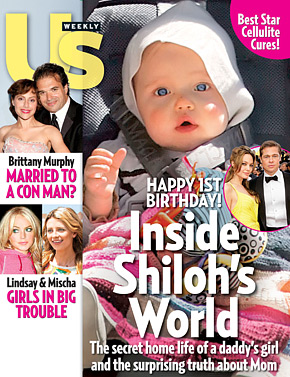 The shoot took took place in March, when Helena was about 4 weeks old. Publishing is far different from broadcasting; We sometimes have mere minutes to get a story on the air!

We headed to Glastonbury and the studios of photographer Brian Ambrose. Brian and his staff have obviously dealt with babies before because they had just the right touch when it came to photographing an infant. They made Helena feel right at home — and having Mom nearby to provide a snack didn’t hurt either!

Brian does a many, many wedding shoots, and let me tell you, his work is out of this world. We actually had two shoots because the editors ended up wanting a different background for the cover, so we went back and did it all over again.

A few months later, the edition is out and you can pick it up at your nearby bookstore or on some store shelves, or call Hartford Magazine at 860-728-5700.

The picture inside of Helena and me is one of my favorites, and there are other dads and their children in there as well.