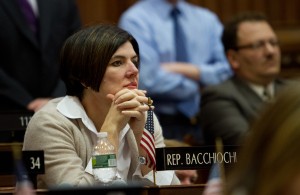 State Representative Penny Bacchiochi is considering running for lieutenant governor in 2014. The Somers Republican was unable to join us for Face the State this Sunday, but told me she has been telling colleagues she plans to open an exploratory committee. That move could come as early as later this week, which will allow Bacchiochi to test the waters and raise money for a run and to help her determine whether to take the plunge and become a full-fledged candidate.

Bacchiochi, now in her sixth term in the house was looked at as a possible candidate for the number two slot in 2010, but in the end, Tom Foley decided to leave the choice of his running mate up to voters.

We discussed this on Face the State. Watch the segment right here: