Ted Kennedy, Junior came in for a taping of Face the State to talk about what he’s been up to and his most important job.     Although he works as a health care attorney,  he is a devoted father and sees being a 24/7 dad as his biggest accomplishment.     As a father myself, I couldn’t agree more that fatherhood is the most rewarding thing I do.

Kennedy’s children are having a much different upbringing than he had.  For example, when Kennedy  got a visit from his father back when he was a college freshman,   the senator showed up on the Wesleyan University campus with an entourage of reporters trying to capture what for most people would be a private moment.      “So much for trying to be anonymous and fit in with my classmates,”  the younger Kennedy told me with a  laugh.      We showed him that film of the Wesleyan visit, which was during Senator Kennedy’s campaign for the 1980 Democratic presidential nomination. 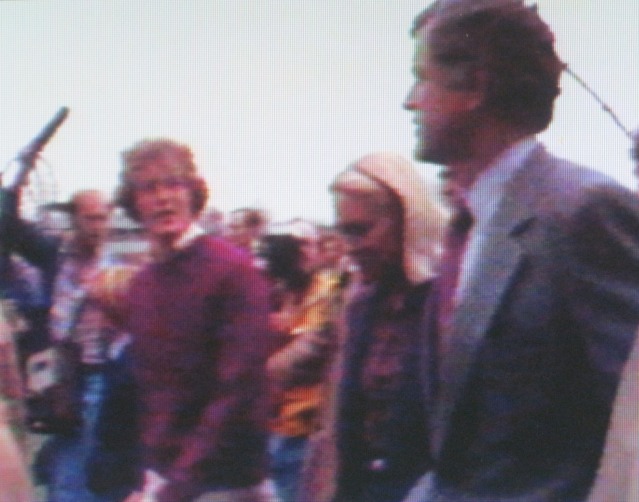 Kennedy also talked about the question he’s been asked hundreds of times, whether he plans to run for office some day.     The answer:  “maybe, some day,”  but he also referenced his aunt Eunice Shriver, who made a profound impact on our country, without ever having  been elected to office.    Kennedy told me he would be honored to serve, but stressed he won’t be a career politician. He also told me Connecticut is his home and he would be honored to serve.

Kennedy’s name was brought up last year as a potential candidate for this year’s U.S. senate race.   Several  people in the party told me he would have easily cleared the Democratic field had he decided to run, and who knows what a Kennedy McMahon race would have looked like.

The Kennedy family has a long history in Connecticut.    President John Kennedy campaigned in Hartford on the eve of the 1960 election, and Senator Ted Kennedy won the 1980 presidential primary, and came here often over the years for official business and to visit family.     The senator’s last public appearance here was in February 2008, when he introduced the voters of Connecticut to Barack Obama at a primary rally at the XL Center.

While Ted Kennedy, Junior won’t be on the ballot this November, he will be on the campaign trail throughout the fall.  He’s been asked to hit the road around the country for President Obama, who is in a tight race with Mitt Romney.   Romney was defeated by Kennedy’s father in the 1994 Massachusetts senate race, and Kennedy talked about that during our taping.

Kennedy also said he intends to work very hard for Chris Murphy, saying “he is the just the type of person we need in the senate.”

We also chatted about Kennedy’s newest project, the Edward M. Kennedy Insitute for the U.S. Senate, currently under construction.

You can watch the interview right here:  Part 1  http://www.wfsb.com/video?autoStart=true&topVideoCatNo=default&clipId=7725960