Oprah’s Visit to Hartford and Other “O” Moments

“Hi, is Gayle there?” the caller to the Eyewitness newsroom asked me.     “I’m sorry, ma’am, could you please take me off speaker, it is difficult to hear you,” I responded.

Truth is, I could understand the caller, but it wasn’t very clear, and I found speakerphone calls annoying, especially when a viewer would call in to complain about something on “The Guiding Light,” which I figured was the subject of this call..   “I’m sorry,” the caller politely said.  “Thank you. Who’s calling?” I asked, feeling somewhat powerful at that moment.  That power trip was short-lived, and as soon as the caller identified herself, I felt awful about the way I’d spoken to one of the most admired women in the world.  “Oprah Winfrey,” the caller declared.

That was my first dealing with Oprah Winfrey, and I still feel terrible about it.    She would call Broadcast House countless times after that, looking for her best friend.   This was before voicemail and cell phones, and the direct newsroom line was the link between Gayle and the queen of talk.

I went on to  meet Oprah a handful of times.   The first was a brief introduction when she came to Hartford in the fall of 1992.    She arrived at Broadcast House in a limo, then appeared on Eyewitness News at 5 with Gayle, and later did the weather with Hilton Kaderli.   During her interview, Oprah dropped a bombshell that made headlines around the world:  she was engaged to longtime boyfriend Stedman Graham.    The tabloids and media organizations flooded WFSB with calls looking to get that coveted clip.

While here in the capital city, Oprah also visited a school in Hartford’s North End, then delivered an inspirational speech at the Bushnell.

Several years later, I met Oprah again when I was invited on her show for a taping of an episode on most eligible newscasters (Chris Wragge, formerly of the CBS Early Show) was also on that edition.)

There was another time when I went to sit in the audience and watch the show, and another time when I interviewed Oprah about her movie “Beloved.”   As I sat across from the ultimate interviewer, I remarked how much Gayle talked just like her, right down to the mannerisms.   Later Gayle corrected me:  “Oprah talks like me.”

In 2011 Kara and I traveled to Chicago to see the Oprah Winfrey show.   My wife is a huge Oprah fan (she DVRd it every day) and as soon as she learned the show was ending, Kara was buying airline tickets to the Windy City.    After the taping was over, the audience remained seated while Oprah took care of taping a few quick things, and during some down time, she said “Where’s Dennis House?”  After a quick chat, she asked for a Gayle story, and I of course obliged.

My brief interactions with Oprah all left me the same impression:  what you see on television, is the real deal.   She truly is very interested in people, and the stories they have to tell.

When I became Gayle’s co-anchor in 1995, I began to learn a little more about Oprah.  On Mondays, Gayle and I would swap stories about our weekends.   I would mention how I went to happy hour  or washed my car, and almost always, Gayle’s story was way more interesting!    Usually she would talk about her children, but if the weekend involved an adventure with Oprah, then she usually had me beat in the excitement department.

One thing I learned from  Oprah, indirectly through the Gayle, was the importance of listening very carefully while conducting an interview.   In order to be a good interviewer, you have to listen to every word the subject says, and Oprah is a master of the art.

For a quarter century the Oprah Winfrey Show was our lead-in to Eyewitness News here on Channel 3.   She was a big part of our station’s history and success and we miss her show. 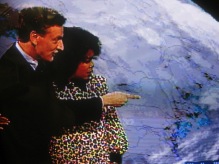