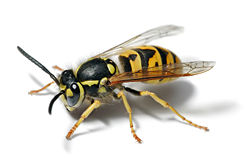 It is the season for yellow jackets.    They are aggressive and dangerous,  which is why when a nest of them was discovered in my front lawn after my teenage neighbor was stung by one,  I called in the experts.  Yellow Jackets can be deadly.  I know, because my grandfather was killed by them.

It happened this week in 1953.   My grandfather, Crescenzo Chully (an Americanized version of the Italian surname Chuilli) was walking through some grass in Norwood, Massachusetts when he accidentally stepped on a nest of yellow jackets.  They swarmed all over him,  stinging him repeatedly.    Unlike bees, yellow jackets can sting over and over again.

It was a horrible attack.   My grandfather had hundreds of stings, many on the face, neck and head.   Those with him pulled him from the scene of the attack and rushed him to the hospital, where this Navy veteran who survived World War II, died two days later.   The number of stings was so great, it led to a deadly swelling in his brain.    He was only 38.  My mother was 12.

As you might imagine, I was raised with a fear of yellow jackets.  Anytime there was a nest in our yard, my mother made sure qualified professionals came and took care of them.   Some folks get out there with spray and go into battle….but  I’m not one of those types.

Deaths by yellow jackets are rare, but they do happen.   About 50 people in the United States die every year from these stings.  In many attacks people have  severe  anaphylactic reactions and have trouble breathing.   More than a million people suffer some sort of reaction from a sting every year.

So the last two summers  I called in Advanced Pest Control in Newington and Jesse the Hornet Hunter went to work.   He took care of the nest in our front lawn, and also found another one near the house, and that too was doused with a powder that will make the nest uninhabitable.

He also told me mid- late summer, particularly September is a busy month for these bugs, often mistaken for bees.  As the nights grow colder, they need a warm place to be.   Without a nest,  most of these yellow jackets won’t survive the night.    By the way, Jesse chose not wear his special bee suit.   As I looked at him like he was a lunatic, he shared with me his escape strategy:  he would run in the opposite direction of the yellow jackets’ flight pattern.  OK.   He would also make a quick getaway since the  insects would understandably be angry.    I watched from the comfort and safety of our living room, as Jesse sprinted calmly to his truck while a confused swarm came out of the ground.

I’m not telling you this to increase your paranoia, just be careful if you see them in your yard.

UPDATE:  contact Norm at www.freeyellowjacketremoval.com   He wants your hornets!