Isn’t everybody just a little bit of an Elvis fan? Tucked away in an industrial neighborhood in Hartford’s South End sits an unexpected collection of memorabilia, tchotchkes, and curiosities celebrating the king of rock and roll, Elvis Presley.

Mr. Trophy has been around since the 1960s where its owner Butch Surwilo been making trophies and plaques for teams and businesses since Ann Uccello was mayor. He’s also been collecting anything Elvis since then and displaying it all in a side room behind a red velvet rope.

There’s a jukebox, an Elvis lamp, Elvis doll, a toy model of Elvis’ pink Cadillac, albums, nicknacks, and Elvis PEZ dispensers. Butch will gladly show it all, with a broad smile and white hair that I imagined Elvis’ coiffure would look like today had he lived.

Surwilo also told me how he made a plaque for Presley to commemorate his concert at the Hartford Civic Center in 1976 and handed it to a security guard hoping it would get Butch’s music idol. Presley died in 1978 and Surwilo never knew if Elvis ever got his craftsmanship until he visited Graceland.

Surwilo was stunned to see his work of art hanging in Elvis Presley’s beloved home. 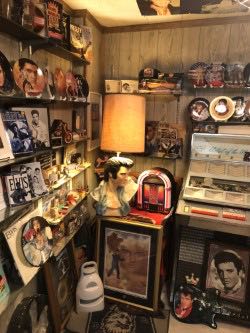