I’ve known Diane Smith for most of my twenty one years here in Connecticut, mostly on a casual basis at events and so forth. When I first started here at Channel 3, anchoring the noon and 5:30PM newscasts on WTNH. During that time, she racked up Emmys and other awards, accomplishments that continued after she left Channel 8 and put her talents to work at CPTV.

Diane is now sharing something about the past decades that most of us didn’t know: her battle with her weight. If anyone noticed, no one said a thing, except for her close friend Mika Brzezinski, who confronted Diane and called her “fat.” Ouch.

That moment led to a dramatic change in Diane’s life, and spurred the new book “Obsessed, America’s Food Obsession and My Own,” which Diane co-authored with Mika. It is now on the New York Times bestseller list.

This Sunday on Face the State, Diane joins me to talk about the book, and what she hopes will come of it.

One thing you will notice when you watch on Sunday is Diane’s weight loss: she has dropped 75 pounds. She looks amazing, and Diane has easily dropped 5 to 10 years off her appearance. Here is Diane now, and a picture of her in the exact same seat a year ago. 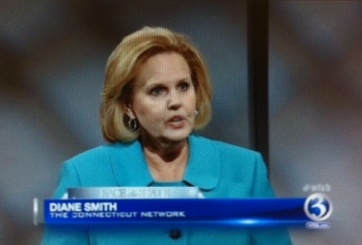 On Sunday, we’ll talk about what the government should or should not do about food that makes people fat, and how local lawmakers are reacting to Diane’s crusade against obesity. It’s a fascinating conversation.

Tune in this Sunday at 11 for Face the State, only on WFSB Channel 3.