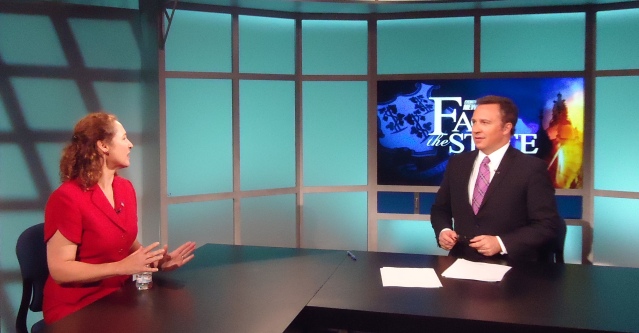 Our first guest this weekend on Face the State is Elizabeth Esty, the former state representative from Cheshire, now running for the Democratic nomination for congress in the 5th district.    Esty has pretty much laid low since announcing her campaign early this year, but she’s been the subject of a decent amount of press coverage because of her husband, DEEP Commissioner Daniel Esty.

The Hartford Courant’s Jon Lender questioned a conflict of interest due to contributions made by Northeast Utilities to Elizabeth Esty’s campaign.   As head of the DEEP, Daniel Esty oversees NU, and other utilities.    There were questions about whether NU contributed to the Esty campaign in an effort to curry favor with Commissioner Esty.   I asked Mrs. Esty about that issue and whether she would return the contributions.   You’ll hear her talk about that on Sunday.

I asked Esty about what kind of role her husband  plays in her campaign, and about something that raised eyebrows in the the Channel 3 newsroom.    The official telephone number for her campaign listed on her website, is in her husband’s name.   The Estys have two numbers listed at their home address in Cheshire, and this is one of them.   Whenever we received a call from Esty’s campaign, the caller ID appeared this way.

I asked Mrs. Esty about that, and she replied that although the phone is in her husband’s name, she pays the bill and she didn’t think calls from that number were a big deal.    At the time of taping, we were unable to determine whether this violates any state ethics rules.  Clearly, any potential donor to the Esty campaign who took a call made from that number was given a not so subtle reminder that the candidate is married to a very powerful man.    Are toll calls made from that number paid for by the campaign?

During the taping we also talked about House Speaker Christopher Donovan, and why Esty believes she is the better candidate.   She was also questioned about her stance on whether she feels Donovan should step down from the committee redrawing the congressional districts.

You can watch the entire interview this Sunday morning at 11 only on Face the State on Channel 3.

FOLLOW UP: Watch the interview with Elizabeth Esty here, and read about the ethics question