This Labor Day weekend marks a momentous event in the history of UConn football:  the Huskies will play in front of their biggest crowd ever.    On September 4, UConn will take on the University of Michigan in Ann Arbor at Michigan Stadium, known as the “Big House.”

As today’s Detroit Free Press reports,  the Big House is even bigger after some renovations, with capacity at 109,901.  It is the biggest stadium in the United States.    To put it into perspective, Rentscher Field has a capacity of 40,000.

Kara and I can’t make the trip for the big game but no doubt thousands of Connecticut fans will.    I will tell you from experience, there is nothing like a game in the Big House.  First of all, Ann Arbor is a great town, pulsating with activity.    Check out Zingerman’s Deli while you’re there.   Kara, who went grew up in Metro Detroit and went to U of M,  also recommends getting a creation called a “chipati” at Pizza  House.   Also on the must see list:  a  beer at Rick’s, an  ice cream at Stucci’s, and  breakfast at Angelo’s.

There are two hotels on campus: The Campus Inn and the Bell Tower, but they book quickly.    Kara and I also like to stay in downtown Detroit  either at the Marriott Renaissance Center with awesome  views of the Motor City and  Canada, or the new MGM Grand.     You can fly to Motown out of Bradley and the Hartford-Detroit flight is a quick one.    For tourism, check out Greenfield Village in Dearborn.  The big attraction there is the Lincoln limousine in which President Kennedy was assassinated.    You can also hit a factory tour to see how cars are made.

My first experience with Ann Arbor was to cover a Michigan Florida State game in 1991 when I was living in the Great Lakes State.    Back then the capacity was only 103,000 or something like that.   This was a welcome assignment, but I prefer being a spectator.   My last game there was in 2006, a cold and rainy experience as you can tell by the way we are all bundled up. 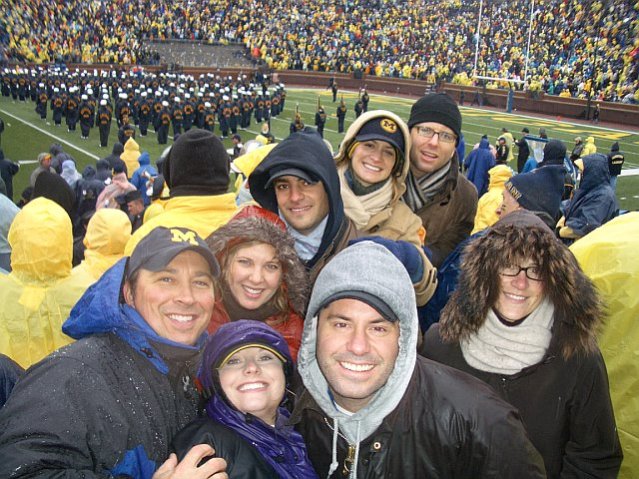 Hope for nice weather this Labor Day and take advantage of the fact the sun sets an hour later in Michigan than it does here in Connecticut.