If you’re coming to Hartford, bring a bag lunch! 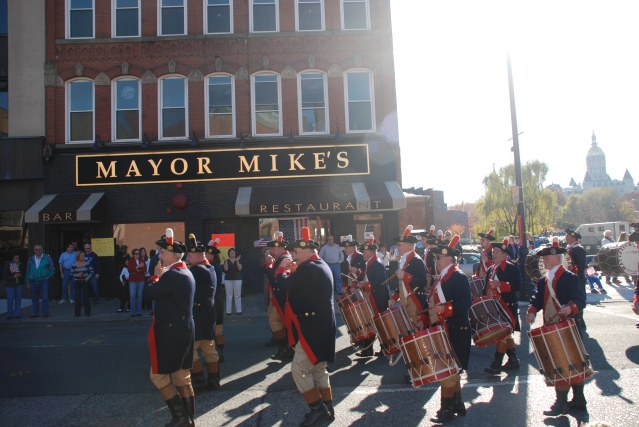 You can’t win if you don’t play.    That’s an old phrase from the Lottery but it holds true in downtown Hartford where some merchants   often complain “it’s hard to stay in business because there aren’t enough people downtown.”

Let’s go back to Sunday November 8th, the  day of the Connecticut Veterans Day Parade.    It was a beautiful day.  The sun was shining, it was warm, and there was barely a breeze.    It was an unseasonably mild November day to honor the men and women from our state who served our country and to honor those who died doing it.    These marchers  survived wars in Germany and Vietnam yet couldn’t buy a bottled water  in downtown Hartford.

A crowd of 45,000 people lined the streets of downtown, yet Starbucks was closed.  Dunkin Donuts closed.  Tapas closed, and the list goes on.   Even McDonald’s was closed.  45,000 people stood outside shuttered eateries and coffee shops.  Kara and I were stunned.    Restaurants with outdoor seating on the parade route were closed.   I don’t get it.

Laura Soll, the public relations maven who helps organize the parade told me a tremendous effort was made to encourage businesses to open for the parade crowd.  Apparently that effort fell on deaf ears.

To their credit, there were places that did open,  like  Mayor Mike’s where we ate.   But no doubt the owners of Mayor Mike’s had real estate envy that day looking at Black Eyed Sally’s a half block away.  Right on the parade route with patio seating in the brilliant sunshine with a spectacular view of the State Capitol.  It too, was closed.

The restaurants who  closed on the day of the Veterans Day Parade did your capital city a tremendous disservice.   For many of the parade goers from all over the state it may have been the only day of the year they came to Hartford.   They went back to Putnam or Plainville and told people Hartford was a ghost town.     Sadly, they were right!    Suburbanites who pulled on the locked  Starbucks  door, later spent their cash on mocha lattes when they returned to West Hartford and Glastonbury.

The damage these parade- spurning places inflicted on the city will be long lasting.  Next time one of those parade goers has to come to Hartford he or she will know to eat first outside the city and then come in for a game, concert or whatever.   Stop at the Starbucks in Manchester and get your coffees first, then go into Hartford.     They won’t take a chance to come downtown in the event they arrive to find everything closed.

I love to use Vaughan’s as a model of how to run a Hartford business.  It is open 7 days a week lunch and dinner and has a reputation for always being there.   It is an attraction because of the way it is dedicated to serving the customer and the city.  Imagine if all the city restaurants were like that.    It would lead to new business and more people on the streets.   People might say “let’s go downtown and grab  bite to eat.”

Parade organizers brought 45 thousand people downtown.  The Convention Center had the car show.   Downtown Churches attracted hundreds of people.  The Wadsworth Atheneum and Connecticut Science Center doing brisk business.  Despite all of this, many restaurants did not open.

My first visit to a marijuana store to see what it might be like if Connecticut legalizes cannabis. This shop sells 200 different marijuana products all legal in Massachusetts but illegal in Connecticut. Watch my report Sunday at 10 on This Week in Connecticut on @wtnh8. Thanks to @e_rik_williams @audreyrp for the tour of @cannaprovisionsholyoke #cannabis #connecticut #wtnh