Keeping the Whalers Dream Alive, in Connecticut and Across the USA 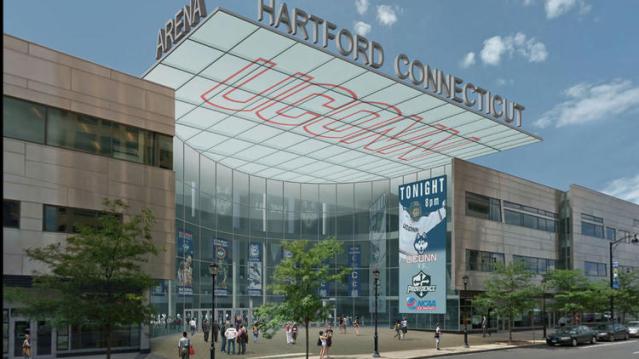 When options for a new arena in downtown Hartford were unveiled last week, it made news here in Connecticut of course, but then word of a potential return of the Hartford Whalers spread all over the country. Fans of our former beloved NHL team are everywhere, and they carry a torch for the blue and green in the hopes the Whale will once again skate on a revered city block bounded by Trumbull, Church, Asylum and Ann Uccello Streets. More on the faithful in a moment.

This Sunday on Face the State, we were joined by Mike Freimuth, the director of the Capital Region Development Authority, which is in charge of the future the XL Center, often still called by its birth name, the Hartford Civic Center.

Freimuth discussed in-depth the options for a new arena, which he stresses is the only way Hartford will ever see an NHL team again. He talked about the best choice of the options, and most importantly what he learned from a recent study into the future of the XL: that this Metro Hartford market and the state can support a major league hockey team. One of the sketches unveiled for a new coliseum was even done in Whalers colors. Hmmm.

Restoring an NHL team to Hartford is a complex issue, and Freimuth walked us through it this past Sunday. Watch the interview right here: http://www.wfsb.com/video?autoStart=true&topVideoCatNo=default&clipId=11183513

Now back to those fans. Put Hartford Whalers in Twitter and you’ll be amazed. Hartford Whaler-philes are everywhere, and I often get tweets and e-mails from them sporting Whalers gear, which according to reports, is the 7th best selling merchandise in the NHL.

Case in point, check out four friends of mine, all former nutmeggers, now living far from the land of steady habits, but who have a steady habit of proudly wearing Whalers attire in their new homes. Simsbury native Mike Long tools around southern California wearing anything with the Whalers logo, and even wore a shirt to the Stanley Cup championship in Los Angeles last year.

The pride of New Milford, Mike Guerrieri, loves to show off his home state’s legendary team in Houston, Texas.

Best of all, Eric Ferreri, a transplant from Storrs to Raleigh, North Carolina wears his Whalers shirts and hats to games of the Carolina Hurricanes, his children’s hometown team.

Learn more about the future of the XL Center this this Sunday morning at 11 on Face the State and send me pics via Twitter, Instagram or Facebook of you wearing your Whalers gear.