It seems every day there is a new development in the Hillary Clinton email controversy.  Almost every major Democrat in Connecticut including the governor and both of Connecticut’s U.S. Senators have endorsed the former Secretary of State, so there is tremendous interest in the story.  The revelations have contributed to a dramatic increase in the number of people who think Clinton is dishonest and untrustworthy.

Sunday on Face the State at 11AM on WFSB, we discussed  the  impact the FBI investigation is having on Clinton’s campaign with two former state party chairmen, Ed Marcus for the Democrats and Chris DePino for the Republicans.  We also got their take on a potential run for governor in 2018 by Joe Scarborough, the host of Morning Joe on MSNBC, and they also talked about races for mayor in Bridgeport and Hartford.

“I’m very excited about Java Joe for governor of Connecticut,” DePino said.  “He has crossover appeal and would get women and urban voters.”  DePino called it “pretty close” to an endorsement. 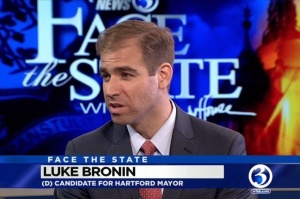 Speaking of Hartford, we were also joined by Democrat Luke Bronin, who won the party’s endorsement in his battle with Mayor Pedro Segarra.  He talked about his plan, the mayor’s record (Bronin gave him a C grade) and his own future   He committed to serving a full four year term if elected.  Watch the interview here: http://www.wfsb.com/clip/11762997/luke-bronin-gears-up-for-hartford-mayoral-election

Our flashback takes us back to 2004, when former President Jimmy Carter visited Naval Station New London,the Groton sub base where more than a half century earlier trained for World War II.  The report that day was filed by Eric Parker. Watch that here: http://www.wfsb.com/clip/11763107/flashback-to-when-jimmy-carter-came-to-ct

A shoutout to this guy, Liam, who is so brave for telling his story to help others. He was addicted to vaping. Watch my interview with him tonight at 7 in our special town hall “Clearing the Air” with @lisacarberg and @darrenkramer8 #connecticut #vaping