Vociferous Vice Back on Channel 3 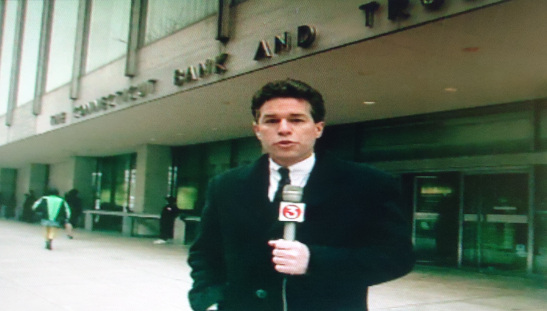 For a generation of Connecticut television viewers he was known as the “Money Man.” Jim Vicevich was a business reporter for WFSB for thirteen years in the 80s and 90s, and was a reliable mainstay in a period of tremendous economic change. He filed his first report for Channel 3 as the Carter malaise came to a close, covered the boom of the Reagan era, and signed off shortly after the first President Bush was sent into retirement.

To give you a sense of just how big of a deal Jim was back then, whenever he would walk into a lending institution during the banking crisis of the early 90s, employees began to sweat. They instantly knew that the Money Man knew what they didn’t know; that their bank was closing. Jim Vicevich had great sources.

I was a Channel 3 rookie then, and after watching a couple of Jim’s reports I had doubts about whether I could make it here. He was that good; always the consummate journalist, known for breaking big stories and double checking his facts. Whether he was reporting from the Soviet Union or CityPlace, Jim was never unprepared. He spoke with such determination, Denise D’Ascenzo nicknamed him the “Vociferous Vice.” Our news director Mark Effron once told me Jim was “one of the best reporters around.” I learned a great deal from him.

This past Sunday on Face the State, Jim returned to Channel 3 to share details about the current chapter in his life, one he is facing with with determination and optimism. Jim suffers from Lupus, an autoimmune disease that doesn’t get the attention cancer or heart disease receive, but affects millions of people. During our taping, Jim explained how Lupus has changed his life, and how he is using his position to help find a cure. You can watch the segment below.

Seven years ago this month, Jim launched Sound Off Connecticut, a daily show on WTIC AM 1080. He’s been called the “Rush Limbaugh of Connecticut,” but he calls himself simply a proud libertarian. Sound Off is one of the most listened to radio programs in the state.

Also on Sunday, Jim joined our political roundtable discussion with Christine Stuart of ctnewsjunkie.com and Matt DiRienzo of Connecticut Magazine and the Torrington Register Citizen as we talked about the Tom Foley interview and the governor’s race.

Watch these segments on other Channel 3 alumni: