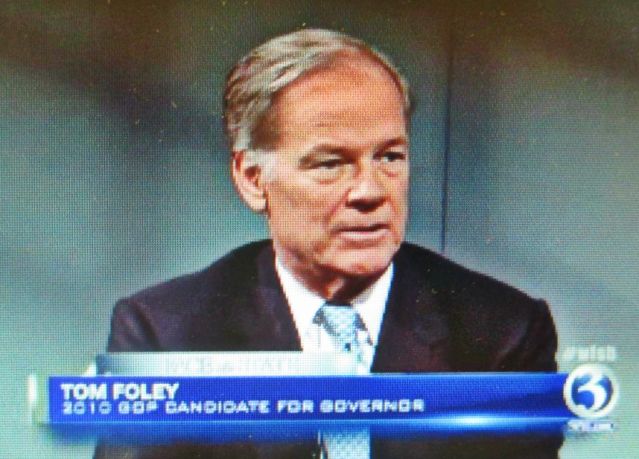 There are no official candidates yet in the race for governor, but the state Democratic party is already focused on the man it apparently believes will be the Republican candidate, 2010 GOP nominee Tom Foley. The former U.S. Ambassador to Ireland has made no secret of his intention to seek a rematch with Governor Dannel Malloy, but he did not declare his candidacy during a taping of Face the State, that aired Sunday. Other potential candidates for governor include State Senators John McKinney and Toni Boucher, House Minority Leader Larry Cafero, and Danbury Mayor Mark Boughton.

Foley shared with me some details of internal polling he’s done on the 2014 race. In a nutshell, Foley said his findings show the governor to be vulnerable and beatable in 2014 because of joblessness and the economy. Foley went on to say he believes fixing the Connecticut economy is simple and suggested the governor is taking the wrong action.

“All you have to do is hold spending flat for two years, but he is raising spending by $778 million. Why? We don’t have the money.”

Foley talked about what will likely be a key argument during the upcoming campaign: taxes.

We also talked about Foley’s take on the gun control law recently passed by the legislature and signed by Governor Malloy. During that discussion, Foley said more needs to be done for mental illness and he revealed that mental illness has affected his family. He has cared for a sibling with mental illness for 30 years.

After the Foley interview we had a political roundtable discussion with CT News Junkie’s Christine Stuart, the new editor of Connecticut Magazine Matt DiRienzo of the Torrington Register Citizen, and WTIC AM 1080’s Jim Vicevich. Read more about Jim’s appearance right here: http://dennishouse.wordpress.com/2013/04/18/vociferous-vice-back-on-channel-3/

You can watch the Foley interview right here: http://www.wfsb.com/video?autoStart=true&topVideoCatNo=default&clipId=8797065

Watch our interview with Governor Malloy from February: http://dennishouse.wordpress.com/2013/02/07/malloy-to-hit-road-to-rally-support-for-budget-plan-mum-on-14-run/