McMahon to appear on “Face the State”

The pizza joints are getting their delivery drivers ready.   People are running to the grocery store to buy chicken wings and  ingredients for chili.    Sales of plasma televisions are expected to soar in the days ahead, all for a big television event this Sunday.

Okay, so perhaps I am exaggerating…..ok, completely fabricating, but this week’s Face the State IS  already getting attention.  That’s because Republican senate candidate Linda McMahon will be making her inaugural appearance on FTS.

Normally we release the  Face the State guest list after the show is taped on Thursday nights.  We made an exception in this case to satisfy viewers who kept asking “when are you going to have Linda McMahon on?”   I was being accused of not inviting her to appear, which simply was untrue.   In September we invited all the senate candidates to make individual appearances.     The McMahon camp and I agreed on the date of January 17th back in November, and announced it then.

Someone already called the appearance the “Rumble in Rocky Hill,”  but I think “Interview in the Industrial Park” is more like it.   Mrs. McMahon will be treated like every other guest.    We are not out to get her and the questions will be fair.   We asked tough questions of Senator Chris Dodd and he came back on a second time, so one can assume he felt our line of questioning was fair.     We expect this will be the first of several appearances on Face the State this year by McMahon.

The guest reporters will be Daniela Altimari of the Hartford Courant and Brian Lockhart of the Stamford Advocate.  Both are outstanding, well respected journalists who have been on “Face the State” before.   Most importantly, they have reported on the McMahon campaign and bring insight and experience to the broadcast  that should serve the voters well.

Daniela, Brian and I will have a list of questions, and because it is only a thirty minute broadcast (24.5 minutes after commercials) we may not get to them all.  Also, interviews are often like conversations, and at times a person’s answer to a question may lead to a follow-up question we hadn’t thought of.  Seldom does an interview go exactly as planned.

No matter what happens, I expect to get some negative reviews from our viewers.   There will be the usual ones labeling us the “liberal media” and that I am secretly a Republican or secretly a Democrat.    I’ve had people call me a Democrat if I wear a blue tie and a Republican if I wear red.  Think I’ll wear purple.   There will be others who will accuse me of being too easy on a guest.  Others, think we are too hard, with an agenda.  Someone actually blamed me for Senator Dodd’s decision to retire.  I’m flattered someone thinks I’m that influential, but we can take no credit for that.

As of the writing of this blog, the Face the State set is in shambles.    Workers are doing some kitchen construction in the studio, which we share with “Better Connecticut,” and “Friday Night Frenzy.”    I’m told the set will be put back together in time for our taping.      If you see Mrs. McMahon and  me sitting on a ladder, you’ll know what happened! 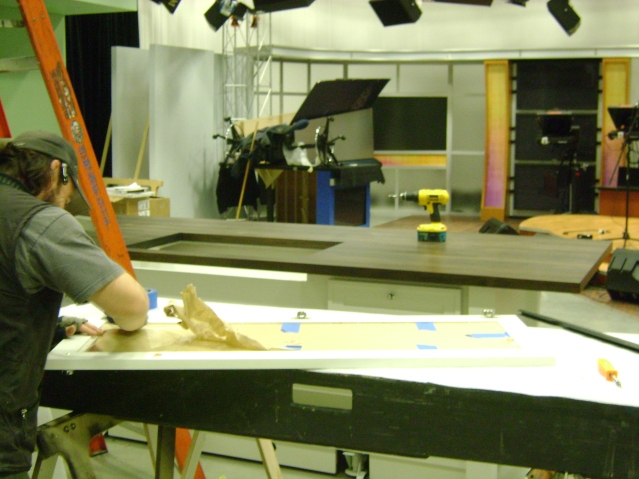 Face the State airs this Sunday morning at 11AM.

A priest and a news anchor who just used to be a couple college kids together. Always great to see @fr.michaeldolan my fellow @assumptionuma Hound, the pride of #waterbury who wears many hats in our state including president of @northwest_catholic and chaplain of the @ct_state_police (swipe ⬅️)